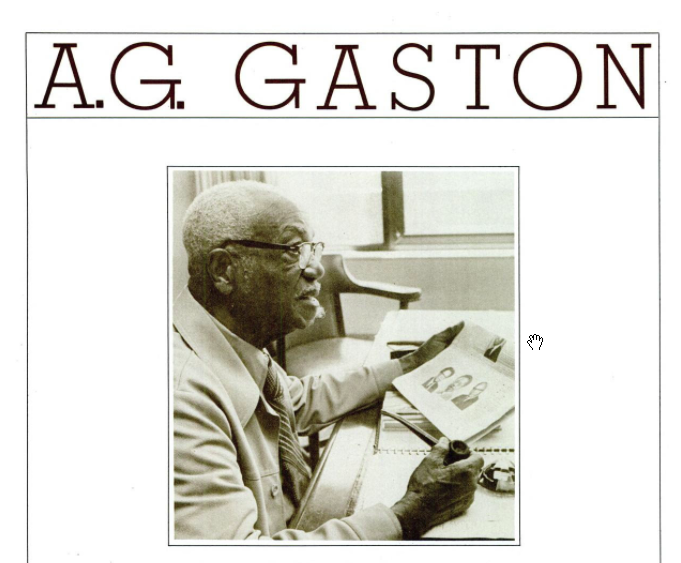 This year, BLACK ENTERPRISE celebrates the 45th anniversary of its roster of the nation’s largest black-owned businesses—The BE 100s. To commemorate the significance of this collective’s widespread impact on black business and economic development as well as American industry over four decades, we have presented 45 milestone moments. As part of this tribute, we continue our yearlong countdown.

Today we reveal No. 24 in the web series “Great Moments in Black Business.”

Born the grandson of a slave in a log cabin on July 4, 1892, Arthur George Gaston Sr. prevailed over the barriers of the Jim Crow South to emerge as one of America’s most multifaceted and dynamic black businessmen.

His example of strategic brilliance and unyielding tenacity served as a model of inspiration for generations of African American entrepreneurs—from John H. Johnson, the media giant who founded Ebony and Jet magazines, among other enterprises, to Henry “Hank” Aaron, the baseball legend who created his own empire of automotive and fast-food franchises and the most recent recipient of BE’s highest business honor which aptly bears Gaston’s name. “I wanted to be similar to Mr. Gaston,” Aaron told BE earlier this year. “I watched him and tried to find out what it took for him to be the kind of man that he was. I said, ‘This man is very successful, and not just because he’s making money but because he’s able to share it with other people.”

Receiving only a 10th-grade education, Gaston joined the Army during World War I. After his military service, he worked for a Birmingham, Alabama, coal company. He was determined to become an entrepreneur. “Start somewhere” he would say decades later. He did that and much more, accumulating a fortune of more than $130 million by 1996, the year he died at the ripe age of 103.

Gaston’s vast business kingdom included a savings and loan bank, business college, construction company, motel, real estate firm, burial insurance company, two cemeteries, and two radio stations The founder and chairman of BE 100s companies Citizens Federal Savings Bank and Booker T. Washington Life Insurance Co. in Alabama, A.G. Gaston has been the only entrepreneur to earn the distinction of BLACK ENTERPRISE Entrepreneur of the Century; earning the honor in 1992—the 20th anniversary of our ranking of the nation’s largest black-owned businesses. In his interview with BE for the appropriately titled article, True Grit, he maintained that getting rich was “accidental.” He simply tried to fill the needs he observed in the community, according to that article.

Gaston started the Booker T. Washington Insurance Co. in 1932—named after his hero, the proponent of “black economic self-determination” who founded Tuskegee University and the National Business League in 1881 and 1901, respectively, and served as an adviser to presidents—as a vehicle to sell life, health, and accident insurance. Using his business savvy, he created new revenue streams by adding burial insurance, undertaking, making caskets, and selling burial plots. Seeing a lack of skilled clerks and typists in his daily business operations, in 1939 Gaston started the Booker T. Washington Business College.

He spotted other niches and added companies to fill them. They included Vulcan Realty and Investment Co., the A. G. Gaston Home for Senior Citizens, WENN-FM and WAGG-AM radio stations, and S & G Public Relations. Fueled by blacks having trouble gaining loans, Gaston in 1957 opened the Citizens Federal Savings and Loan Association, the first black-owned financial institution in Birmingham. About 30 years later, at the age of 94, he still had the spunk to develop the A. G. Gaston Construction Co., to his holdings.

It was, however, no cakewalk for the versatile entrepreneur. Gaston, who used his wealth to back the civil rights movement, even downplayed accusations of being an “Uncle Tom.” During the peak of the civil rights struggles in Birmingham during the 1960s, he was considered too cautious and moderate. Gaston responded that what black people needed was “a Martin Luther King of economics who will fire the people up like they are being fired up for civil rights.” “It doesn’t do any good to arrive at first-class citizenship if you arrive broke.”

He launched his ventures, in part, to design platforms to teach African Americans about business and finance since for years such training had not been available to them. In fact, BE recognized Booker T. Washington Insurance Co. as the most innovative company in the management category when the 95-year old Gaston, who held a 97% controlling interest in the firm, sold the company, which had $35 million in assets and $276 million worth of insurance in force, and all of its subsidiaries to its 400 employees for $3.5 million —a fraction of its value.

At the time, such a move was virtually unheard of for founding entrepreneurs, black or white. And by 2003, Atlanta-based Citizens Trust Bank merged with Citizens Federal Savings Bank in a deal that created a larger institution and retained black ownership under the parent company, Citizens Bancshares Corp. Today, No. 5 on the BE Banks list with assets of nearly $396 million, the transaction would have most assuredly put a smile on the trailblazer’s face had he been alive to see the merger between two black institutions.

Gaston earned many accolades during his life. Each year, BLACK ENTERPRISE presents the A. G. Gaston Lifetime Achievement Award, our top honor, to a groundbreaking African American entrepreneur and philanthropist. It’s fitting that it is named after the icon who once said, “Money is no good unless it contributes something to the community…unless it builds a bridge to a better life. Any man can make money, but it takes a special kind of man to use it responsibly.”