In 2005, podcasts were added to Apple’s iTunes library, creating a new way for consumers to take in information. When Apple released the first generation iPhone two years later, the percentage of podcast users increased by a whopping 163% (between 2006 and 2012). According to a report by The Pew Research Center, 58% of U.S. millennials own smartphones, and that number is only expected to increase. Take a look at five top lifestyle podcasts for millennials:

1. Serial
Serial is a podcast brought to you by the creators of This American Life, hosted by Sarah Koenig.Â Similar to the hit TV show 24, Serial tells one story over the course of an entire season. Season one is centered on the disappearance of a fictional girl named Hae Min Lee, whose body later surfaced in a city park showing evidence of having been strangled to death. In this season, our host Koenig searches for answers about the murder and studies each witness in the case. You can subscribe to this podcast for free on iTunes. Serial is ranked No. 5 on the Current Top 10 Chart for U.S. podcasts.

2. TED Talks
TED Talks, sponsored by the nonprofit organization and psych giant TED, features innovators from around the world sharing their thoughts on a plethora of subjects. The podcasts include discussions that educate and enlighten millennials on science. Those who want to not only see, but create change in the world will benefit from these. The TEDTalk channel also offers full episodes in video as opposed to audio, so feel free to tune in and watch or listen.

3. The Read
Featured on iTunes’ Best of 2013 and 2014 Editor’s Choice, The Read is a weekly show written and produced by Crissle West and friend/co-host Kid Fury. The dynamic pair has sold out live shows in New York City, Los Angeles, London, Toronto, and many other cities. Check out the podcast, which showcases hip-hop and pop culture’s upcoming stars.

4. Radiolab
Radiolab is played on more than 450 NPR stations around the country. The podcast is a show centered on humans and curiosity, “Where sound illuminates ideas, and the boundaries blur between science, philosophy, and human experience,” according to the website. You can also opt to watch or read Radiolab if you don’t feel like listening.

5. EntrepreNoir
EntrepreNoir is a relatively new podcast, designed specifically to help small business owners and eager entrepreneurs turn their ideas into profit. These podcasts use a Q&A, interview style and will feature entrepreneurs from various industries, backgrounds, and levels of success. Click here to learn more or tune in. 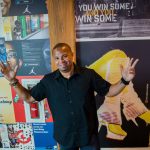