3 Ways Black Celebs are Encouraging YOU Today to VOTE Tomorrow 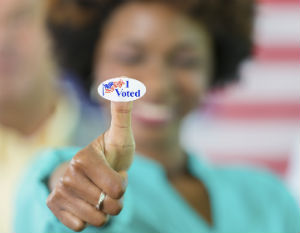 Over the weekend, and in the days leading up to the 2016 presidential election, a number of black celebrities and public figures are taking to their networks to encourage people to get out and vote.

Last Friday, five days out from Election Day, Jay Z put on a concert rally in Cleveland for Hillary Clinton. The all-star lineup not only featured Jay Z, Big Sean, Chance the Rapper, and J. Cole, but also a surprise appearance in the form of BeyoncÃ© herself. As if seeing all of these performers in one concert isn’t enough, the rally was free; all in a passionate effort to emphasize the need to get out the vote.

From free concerts to busing to the polls, here are five ways high-profile folks are mobilizing to get people to the polls, and emphasizing the need to participate in the democratic process and make your voice heard on Nov. 8.

Today, hip-hop artists including T.I., Gucci Mane, Rick Ross, Pusha T, Jay Electronica, and more, will join civic and community engagement firm Vestige Strategies and the 1199SEIU United Healthcare Workers East Union to encourage the millennial vote at the Youth Gets It Done rally. Held at Florida Memorial University and hosted by Angie Martinez, the rally aims to help mobilize black and Latino youth to the polls on Election Day and will also include activists and leaders such as Sybrina Fulton, Aja Monet, Afro-Cuban poet Carmen Berkley, Sierra Club President Aaron Mair, and Stephen Green, the NAACP Youth and College Division National Director.Â The Youth Gets It Done rally goes from 6-10pm ET with doors opening at 5pm ET.

A Day of Black Radio Solidarity – Driving Souls To The Polls

On Election Day, the collective of black radio–urban, old school, and hip-hop–will come together for “A Day of Black Radio Solidarity – Driving Souls To The Polls.â€ This one-day, national non-partisan “get-out-and-vote” campaign includes a five-point call-to-action:

1. Vote Early! Get An Absentee Ballot, complete it and return it to your local Board Of Elections.
2. Go 5 Deep: Call a neighbor. Call a friend and let’s transport them to the polls.
3. Calling all lawyers, fraternities, sororities, and community leaders to please VOLUNTEER as an observer to ensure the integrity of the voting process.
4. Know Your Rights: Study the sample ballots. Learn about the candidates.
5. On Nov. 8, 2016, Don’t complain, VOTE.

Correction:Â SocialWorks and Virgin Hotels Chicago Parade to the Polls concert with Chance the Rapper and others has been relocated to the Petrillo Music Shell in Grant Park. Black Enterprise originally published the concert would be held at The Virgin Hotel Chicago.