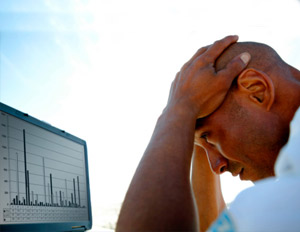 Brace yourself for stock market activity with all the twists, turns and plunges of the Intimidator 305 roller coaster ride. The roller coaster ride is evident with the impact of the Standard & Poor’s downgrade, which gave the markets the worse day since the financial meltdown of 2008: The Dow Jones industrial average dropped more than 5.5 percent, or about 630 points, while the S&P 500, a broader measure of stocks, plunged about 6.6 percent. Investors fled to the new safe haven of the day: gold, which soared to a record high price of over $1,700 per ounce.

President Barack Obama was finally able to sign legislation to raise the debt ceiling and avert default by the Aug. 2 deadline. Putting an end to the ugly month-long battle between Democrats and the GOP over deficit reduction, the act did little to move the market.

Nervous investors sold shares responding to reports that American consumers had cut spending for the first time in 20 months and manufacturing barely grew in July. The news came a week after investors became jittery over the Commerce Department‘s announcement that the U.S. economy grew less than 1% for the first half of 2011. To make matters worse, a downbeat economic review from Federal Reserve Chairman Ben Bernanke and fears over a widening European debt crisis contributed to the Dow’s 513-point nosedive last Thursday, the largest point decline since Oct. 22, 2008.Â  Then Friday the Dow had another wild ride, a 416-point swing as investors in response to the better-than-expected jobs report, progress on the European financial front and news of the debt downgrade, which S&P announced after financial markets closed.

Informing the agency of $2 trillion error in its deficit projections, U.S. Treasury officials stated the miscalculation raised “fundamental questions about the credibility and integrity of S&P’s ratings action.â€ In a conference call with reporters on Saturday, the agency defended its move, asserting the debt ceiling stalemate demonstratedÂ  “a degree of uncertainty around the political policy-making process which we all think is incompatible with a AAA rating.”

The downgrade from AAA to AA+ could lead to higher interest rates and borrowing costs on everything from credit cards to mortgages. And local governments may find access to funds much more expensive.

It also brings another element of uncertainty to the markets. Policy makers and investors are preparing for even more turbulence. Global exchanges had a negative reaction to the downgrade when markets opened Monday: Major Asian indexes in Tokyo and Shanghai were all down more than 2% after the opening bell. Treasury yields fell as gold hit a record.