Presenting Our 2017 50 Best Companies for Diversity 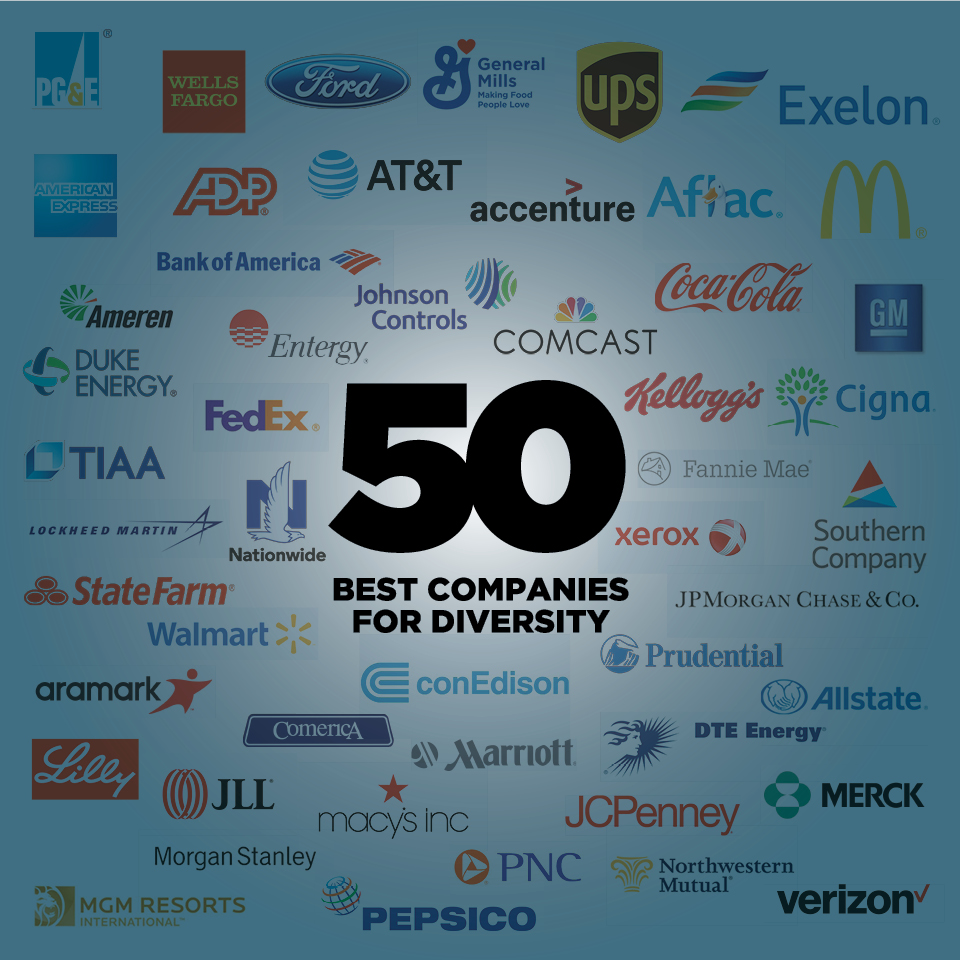 Diversity matters. Studies have confirmed that diverse environments bolster corporations, promoting greater innovation and sharpening competitiveness. In fact, for years, the New York-based Center for Talent Innovation has found that inclusive leadership produces “the diversity dividend” that results in greater market share and a competitive advantage in gaining access to new markets as well as a “speak-up culture” that values and stimulates new ideas.

Even with such undeniable evidence, diversity continues to be one of today’s most challenging organizational issues. According to a recent BlackEnterprise.com report on The Top 15 Most Challenging HR Compliance Issues for 2018, a white paper based on a recent study conducted by XpertHR of human resource professionals at more than 1,000 small, medium, and large employers, roughly 25% of respondents conceded that they were “very or extremely challenged by developing a culture of inclusion.” Moreover, 29% and 33%, respectively, cited similar difficulties in “recruiting a more diverse workforce” and “increasing minorities in leadership roles.” Despite these hurdles, the white paper outlined benefits of diverse workplaces such as increasing employee productivity, reducing legal claims, improving internal and public image and branding, and boosting customer loyalty and engagement, to name a few.

In recent years, more CEOs have placed diversity and inclusion (D&I) on their radar screens. Seventy corporate and academic leaders among the 330 signatories of the CEO Action for Diversity & Inclusion—who have pledged to cultivate “safe” corporate environments that embrace employee discussions on D&I and racial issues—held their inaugural meeting in New York recently to engage in candid, daylong conversations under such themes as “Getting Comfortable with the Uncomfortable,” “Being Truthful About Barriers” and “Creating Collaborative Difference.” Comparing the convening to the founding of civil rights groups such as the NAACP, National Urban League, and LULAC (League of United Latin American Citizens) in the early 20th century, Cid Wilson, the Afro-Latino president and CEO of the Hispanic Association on Corporate Responsibility, described it as being “a very historic gathering. What was common with all of these meetings was that it was the first of a movement to illuminate what we know is an issue.” At the same time, Wilson cited the need to stop the attrition of prospective executive leaders of color and expand sponsorship at the C-suite level. Another attendee, Michael Bush, CEO of Great Places to Work, asserted: “Personally, I’m not inspired to define and talk about diversity. It’s more about action, and the actions that are required are underrepresented groups of people need to be at the top of organizations.”

With the ongoing debate of such issues, it’s vital for black enterprise and The Executive Leadership Council, the preeminent organization of black global senior managers, to continue to recognize the 50 Best Companies for Diversity, identifying those companies creating pathways to more dynamic workforces, representative corporate governance, expansive supplier pools, and inclusive management. In compiling this year’s list, we have identified those that have demonstrated through action that diversity makes a difference.

HOW WE COMPILED THE 50 BEST COMPANIES FOR DIVERSITY

Black Enterprise’s editorial research team, in partnership with The Executive Leadership Council, sent surveys to the nation’s top 1,000 publicly traded companies and 100 international companies with a major U.S. presence to get an in-depth look at the ethnic and gender composition of these corporations, as well as understand various programs designed to foster and maintain an inclusive working environment. The annual survey is centered around efforts focused on African Americans, but also includes other ethnic minority groups as defined by the U.S. Census Bureau. Any information provided by companies on diversity efforts targeted toward women, LGBT, the disabled, and veterans was used as secondary, supporting data for inclusion on the list.

1 BE measured companies against each other using data from four key categories: employee base, senior management, board of directors, and procurement. Based on a quantitative and editorial analysis, each company received a score. Senior management and board of directors’ categories were given a higher weighting based on company impact across the board. Procurement was also a major factor while employee base was given a lower weighting.

2 We also reviewed the status of companies across all be diversity and corporate leadership lists, including the Top 50 Companies for Supplier Diversity, the 300 Most Powerful Executives, Top Diversity Executives, as well as companies who have chief diversity officers and/or designated D&I departments.

3 We also considered those companies in which the CEO takes an active role in diversity polices and practices.

Employee Base: The percentage of African Americans and members of other ethnic minority groups represented in a given company’s workforce

Procurement: The percentage of total procurement dollars spent with companies owned by African Americans and members of other ethnic minority groups.

AT&T
CEO: Randall L. Stephenson
With African Americans comprising 18% of its workforce, 13% of management, and 15% of its corporate directors, AT&T is among the across-the-board D&I leaders. In fact, five of the company’s top managers made be’s roster of most powerful executives. Its pipeline programs ensure a steady stream of top managers of color in the future. As for supplier diversity, not only has its procurement spend made it a Billion Dollar Roundtable perennial but its capacity-building platforms have enabled a number of black firms to expand into high-growth tech areas.

JOHNSON CONTROLS
CEO: George Oliver
Johnson Controls International continues to increase opportunities for African Americans in the areas of senior management and supplier diversity. Under Vice President of Public Affairs & Chief Diversity Officer Grady L. Crosby, the company has expanded its Senior African American Forum, which provides top leaders an opportunity for candid dialogue on management and pipeline issues with the CEO in a small-group setting. JCI, also included among our 2017 Top 50 Companies for Supplier Diversity, represents the leaders in procurement spend with African American and other minority businesses as a member of the Billion Dollar Roundtable.

JPMORGAN CHASE
CEO: Jamie Dimon
JPMorgan Chase continues to build on the program that it launched in 2016: Advancing Black Leaders. Under Managing Director Valerie Rainford’s leadership, the program has strengthened its focus on recruiting, retaining, developing, and advancing African American talent and creating a pipeline to the officer level. Moreover, JPMorgan Chase has ensured that diversity—including African American talent—has been infused into each element of the succession-planning process as well as the participation of high-potential African American executives in its top leadership and development programs.

According to JPMorgan Chase, Advancing Black Leaders has had an “impact” in its first full year. The firm was proud to welcome new black talent at all levels and create mobility opportunities for black executives. “More than that, we helped to shift the conversation to create a more inclusive work environment and one in which hiring managers are starting to think more holistically about diversifying their talent pools,” said Rainford.

STATE FARM
CEO: Michael L. Tipsord
State Farm understands the value of diverse teams to stay innovative and competitive. In fact, its Leadership Development Program has become a useful tool to ensure that the company develops a highly versatile, skilled, and diverse pool of managers.

TIAA
CEO: Roger W. Ferguson Jr.
TIAA continues its leadership role in the recruitment and development of African American talent for senior leadership roles. In fact, three members of its leadership team can be found on our 300 Most Powerful Executives roster. (Also, Senior Executive Vice President, Human Resources Otha “Skip” Spriggs was recently selected as President and CEO of The Executive Leadership Council.) To ensure an inclusive environment, TIAA has instituted diversity representation goals as part of its corporate scorecard and “on-demand feedback” tools to diminish unconscious bias and ensure fair and objective assessments of employees.