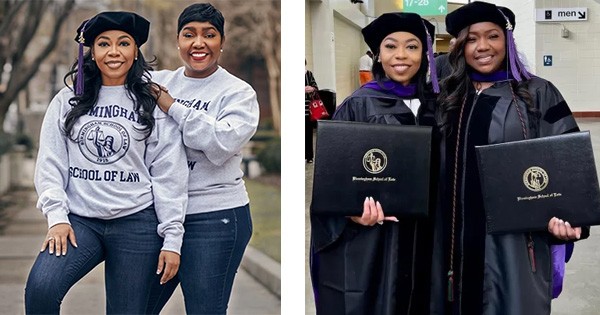 Daphne Davis, a 52-year-old mother, and Edriuna Davis, her 26-year-old daughter, from Birmingham, Alabama, have graduated together from the Birmingham School of Law. They are reportedly the first mother-daughter duo to graduate at the same time since the institution was established in 1915.

In 2009, Daphne first thought of becoming a lawyer while researching and preparing for her own divorce. Her attorney even commended her for her organized work. Since then, she has been thinking about going to law school.

At that time, Edriuna watched as her mother meticulously gathered evidence for her divorce case. It has since developed her interest in law, particularly family law, and she dreamed of attending Harvard Law School.

In 2017, Daphne finally decided to pursue her law studies. With the support of her 2 children, she applied to Birmingham School of Law on the day before the deadline for admissions. She was so happy when she got accepted.

In the same year, Edriuna earned her Bachelor of Science degree in Political Science from Tuskegee University and was accepted to several law schools. She was working for a judge in the Jefferson County Domestic Relations Circuit Court and decided to stay in Alabama to also enter the Birmingham School of Law where her mother had previously enrolled.

The duo said it was an exciting journey but it was also tough at times. Daphne initially had a hard time interacting with some of her professors and classmates before she eventually became more personable with them.

On the other hand, during the summer semester of 2020, Edriuna was diagnosed with postpartum cardiomyopathy after giving birth to her son Denver. She suffered from heart failure but still managed to get through.

Daphne and Edriuna overcame the challenges together and shared a special moment as they graduated together.

“When my name was called at commencement, my smile, walk, pace and movement while receiving my law degree were intentional,” Daphne told the Birmingham Times. “I crossed the finish line, and my lesson was taught to my children — not to mention the exhilarating feeling of standing in wait on the steps watching my daughter receive her Juris Doctorate, as well, so we could walk to our seats together.”

“I was super excited to be able to experience this journey with my mother,” Edriuna said. “I don’t know of anyone else who went to law school and graduated with their mother.”

Now, the duo is preparing for the Alabama bar exam. They plan to work together with Edriuna’s fiancé at his own law firm that specializes in personal injury, criminal law, family law, medical malpractice, and wrongful death cases.