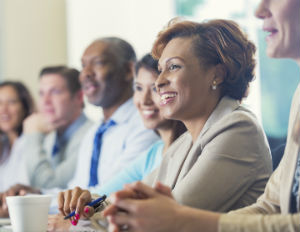 Employee Resource Groups, or ERGs, have long been utilized by corporations aiming to foster a more diverse and inclusive work environment. These voluntary, employee-led groups often help to develop future leaders and increase employee engagement, providing anÂ incentive to remain at the company. They are usually sponsored by a senior executive, called an Executive Champion, who is connected to the issues or theÂ under representation of the group’s members and ensures that the goals and objectives of the group are heard by senior level decision makers.

In under a decade, ERGs have played a role in attracting and retaining diverse talent. They’ve become valuable for recruitment and targeted recruitment of certain under-represented groups and for retaining talent by connecting employees to the company’s values.

Respondents between the ages of 18-34 indicated a much greater likelihood of applying to a company that offers ERGs, compared to those in the 35-44 age range. Almost 70% of 18 to 24-year-olds noted that ERGs would positively impact their decision to apply, while over half (52%) of 25 to 34-year-olds said the same.

Some of the companies listed on Black Enterprise’s 2016 Best Companies for Diversity report are provingÂ that applying and maximizing the power of ERGs can help push a brand beyond just a diversity statement online and into the realm of a true champion for D&I.

Here are two (of our list of seven) corporations that exemplify the power of ERGs:

In 2015, AT&T’s black retention rate was 85.6%. The company touts their many mentoring and employee resource group activities, which have strong representation among African American employees. Its African American ERG, Community NETwork, is a critical, business aligned channel, which has helped produce leadership candidates.

Community NETwork has over 12,000 members, and it is the oldest and third largest ERG at AT&T. In 2015, it contributed more than $111,000 to the United Negro College Fund and $51,000 to national and local scholarships, to provide educational assistance to qualified low-income students.

The Executive Advocate Program (Champions) focuses on enhancing representation of women and people of color at the executive and officer level. Since the program launched in 2013, the company has identified over 30 VP-level and more than 95 GM-level high-potential women and POC, and connected them with an executive officer outside their business unit to serve as mentor, coach–or champion.

Overall, AT&T has 12 employee resource groups with over 112,000 members. The company’s annual ERG Academy provides the elected officers of the ERGs with the education, experience, and exposure they need to grow and realize their potential, and more effectively lead their organizations. It also provides opportunities for sharing best practices across ERGs and networking with AT&T executives in informal settings.

TIAA has eight employee resource groups that aim to bring millennials on board and provides incentives for them to remain, including The Young Professionals or YoPros, an employee group dedicated to young professionals who are early in their career.

According to Skipp Spriggs, executive vice president and chief human resources officer, the group is very active in the millennial arena, conducting social media recruiting and various volunteer events, which recognize that millennials want jobs with a purpose that aligns with their own.

“We feel that, because we’re in the business of providing for those people who serve others, it really resonates with millennials–our value proposition–among making sure we have financial well-being for our clients,â€ he told Black Enterprise.

Part 2 of this story showcasing more companies using ERGs can be found here.