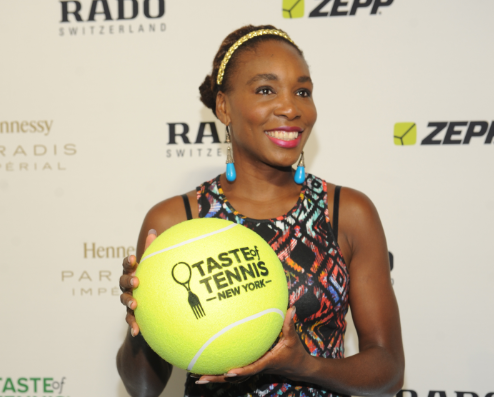 Tuesday night’s U.S. Open match was one for the history books as fans watched sisters Venus and Serena Williams battle it out on the tennis court to see who will advance to the semifinals. With the night being a winning situation for the Williams family regardless of the outcome, younger sister Serena took home the victory as her sister, and opponent, Venus, praised her for her accomplishment.

“I’m so happy for you,” Venus said to Serena following the match.

While both sisters took home $410,975 in prize money for making it this far in the competition, the amount of money they collect for competing in the U.S. Open is only a small fraction of their total net worth. In 2015 alone, Serena Williams raked in an estimated $24.6 million, making her No. 47 on Forbes World’s Highest Paid Athlete list. While Venus earnings and business ventures have been less publicized as of late, her boss moves made both on and off the court are worth being noted.

After becoming a professional athlete at the young age of 14, Venus has been closing business deals off the court that have greatly contributed to her estimated $75 million net worth. Click below to see what checks the 35-year-old star athlete is cashing when she’s not in competition mode.

In 1995, at the young age of 15, Venus signed a five-year, $12 million contract with Reebok. Once that deal expired in 2000, she signed a new contract with the company for a reported $40 million, making it one of the richest endorsement deals ever for a female athlete. In addition to her deal with Reebok, Williams has also had endorsement deals with Wilson’s Leather, Electronic Arts, Kraft, Ralph Lauren and Tide.

In 2002, Venus Williams took her talents off the court and started her own interior design business called V Starr Interiors. Serving as a small boutique firm in Jupiter, Florida, V Starr Interiors has been hired for several major projects including the decoration of a $6.5 million luxury model condo for a Boca Raton development in 2012. Today, the company is run by Williams and six other designers, who are all women.

In 2009, Venus Williams, along with her sister Serena Williams, became partial owners of the Miami Dolphins. Their investment in the team made the sisters the first female African Americans to have ownership stake in an NFL franchise. The team is worth $1.3 billion and was ranked No. 39 on “The World’s 50 Most Valuable Sports Teams 2015” list by Forbes.

In July 2010, Williams and writer Kelly E. Carter co-authored the book Come to Win: Business Leaders, Artists, Doctors, and Other Visionaries on How Sports Can Help You Top Your Profession. In the book, the award-winning athlete interviewed leaders such as Condoleezza Rice, Sir Richard Branson and Vera Wang on how their earlier years as athletes led to them finding success in their current careers. Her hard work on the book paid off when she was listed as a New York Times best seller.

In 2011, Venus Williams teamed up with Jamba Juice as a celebrity spokesperson and franchise owner, who now has four locations in the Washington, D.C. area. While there are no reports on the exact amount Williams makes from her involvement with Jamba Juice, it is estimated that each Jamba Juice location generates about $700,000 in annual revenue.

In 2012, the superstar athlete re-launched her athletic clothing line, EleVen, which includes stylish and comfortable clothing for both men and women. And with an associate degree in fashion design from the Art Institute of Fort Lauderdale, Williams is very involved with every aspect of her line.

“It is a ton of work because I head up all of the designs,” says Williams. “What I try to do is stay true to who I am as a designer.”

Aside from earning a degree in fashion design and becoming a certified interior decorator, Williams recently earned her bachelor of science in business administration from Indiana University East.

“I’ve learned so much,” Williams said in an IU East press release. “It was always my dream to have a business degree, and I ended up going to art school so many times, but in the back of my head I felt like I needed the tools to be a better leader, to be a better planner, to be better at all of the things I wanted to do in my businesses because I’m so hands-on.”