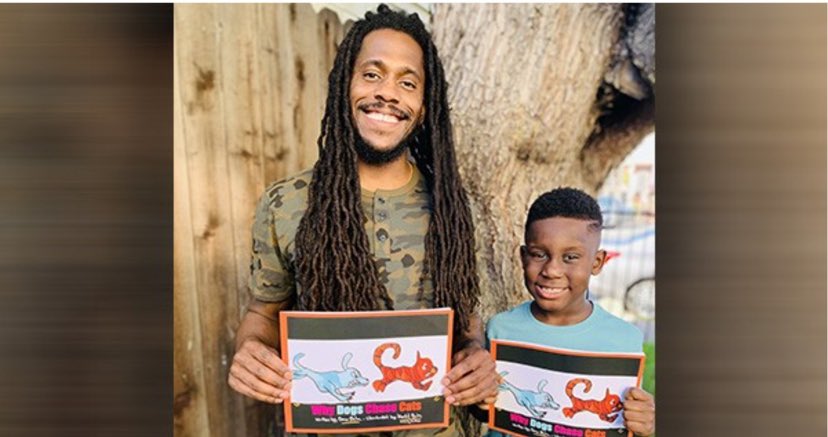 A father and son team in Oakland, Ca. took the initiative to joyfully deviate from what is typically said about Black boys being disinterested in books.

Omar Bala noticed that his son, Khalil Bala showed an aptitude for creating cartoon characters as early as four years old. Omar ultimately assisted Khalil to publish his illustrated work in their two books, “Why Dogs Chase Cats” and “The Lost Baby Spinosaurus,” according to  BlackNews.com.

“I tell Khalil all the time, you’re an artist. Whatever you do and whatever people may say, don’t ever stop drawing,” Omar told BlackNews.com. “I know if he sees his work in a book, that will drive his pursuit to chase his dream in the art industry.”

Illustrations for the ambitious duo’s first books were completed when the aspiring astronaut was 7 years old, according to their official book website.

Omar and Khalil’s journey is refreshing in light of reports that Black boys in some states are underperforming in reading and writing. In Ca., three out of four Black male students could not pass standardized tests in those subject areas, “according to data obtained from the state Department of Education,” per an older report issued by the nonprofit, CalMatters.

And although mainstream book publishers such as Harper Collins Publishers are elevating male and female, Black children’s book illustrators, by showcasing and publishing their work to help children to see more images of themselves, Omar took a noteworthy parenting approach. He represents a hands-on Black father who made substantial efforts to empower his Black son at a young age.

“Whatever you want to be or do, you don’t have to wait, you can do it now,” Omar told BlackNews.com.

Click here to learn more about the Bala’s books which combine African-American folklore and imagination.

FacebookTwitterYoutube
← Jay-Z and Will Smith Invest in Rent-to-Own Startup Landis ← Hone Your Photo, Video, And Audio Editing Skills With This Expert-Led Bundle On Adobe Programs
×