Black History Month Salute: Take a Look at the Lives of a Few Real Life Black 'Rosie the Riveters' 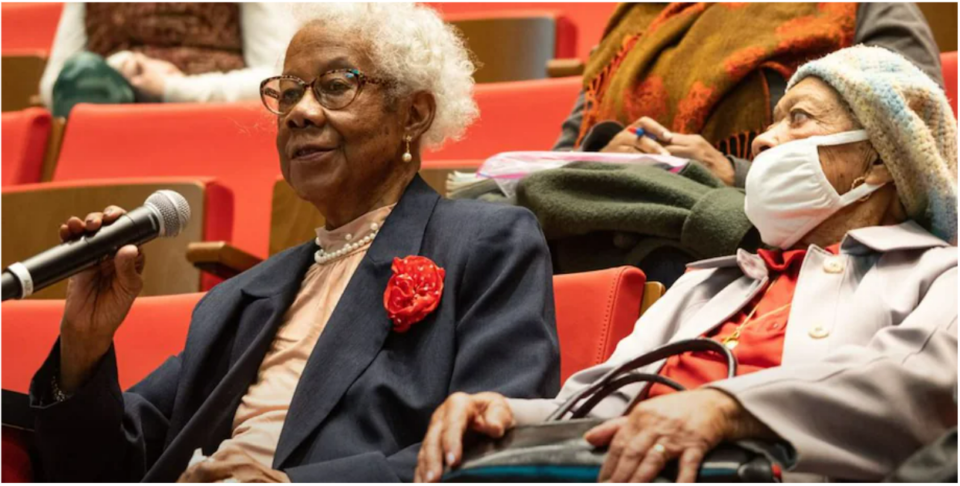 Susan King, and Hilda McDougald at a screening of a film about Black women who worked as “Rosie the Riveters” in World War II. (Courtesy of Stephan Voss and the Netherlands Embassy)

Rosie the Riveter is an American cultural icon of World War II.

The image represents the women who rolled up their sleeves and got to work in factories and shipyards during the war.

But the imagery has long overshadowed the Black women who replaced the many Black men who fought in the war.

The Washington Post reports that around 600,000 “Black Rosies” served in offices, shipyards, and factory jobs during the second world war despite hardly getting any recognition. Eight of the Black Rosies are highlighted in historian and retired Drexel University writing instructor Gregory Cooke’s documentary, “Invisible Warriors — African American Women in World War II.”

The documentary shares the stories of 97-year-old Susan King, 99-year-old Ruth Wilson, and six other senior women who were valuable forces in the war. King earned $58 a week putting together small parts for planes. She went to a class with a friend after learning about a plant in Baltimore that was training women to be riveters.

“Oftentimes, people don’t consider Black women as part of World War II,” King said. “The focus is always on the men of the war. We get lost in the shuffle.”

King praised the documentary for “showing how we helped in the home front in building ships, planes, and bullets, and gave our time.”

Last month, Frank McDougald viewed the film at D.C.’s Martin Luther King Jr. Library with his mom Hilda, 101, who aided in the wartime effort but never talked about her contributions afterward.

“My mom came here to work,” McDougald said. “She never talked about being a Rosie.”

Wilson left her home in New Jersey to work at a shipyard. After the war, she spent 30 years working at a coat factory.

“I thought it was fantastic,” Wilson said of the film. “Nobody had ever done that before that I knew of, so I thought it was really nice to let people know what part Black women played in World War II.”

The film highlights the Black Rosies’ jobs before the war, with many serving as sharecroppers, nannies, or cooks and maids. But during the war, they were able to take on higher-paying jobs due to the labor shortage.

Cooke was inspired to make the film to highlight the Black Rosie’s significant contributions to World War II and to remind them of their value. The historian says the women were “so marginalized that often they had no idea of what a big role they’d played.”

Last September, Wilson returned to her old worksite at the Philadelphia Naval Yard, where she was presented with a photo of the ship she worked on, ABC 6 reports. Cooke also unveiled a portrait by artist Regina Cooke showing Rosie the Riveter as a Black woman, with Wilson being the face of the campaign.

“I feel so appreciated,” she said.