A New Mural for DMX is Unveiled in His Hometown of Yonkers, NY 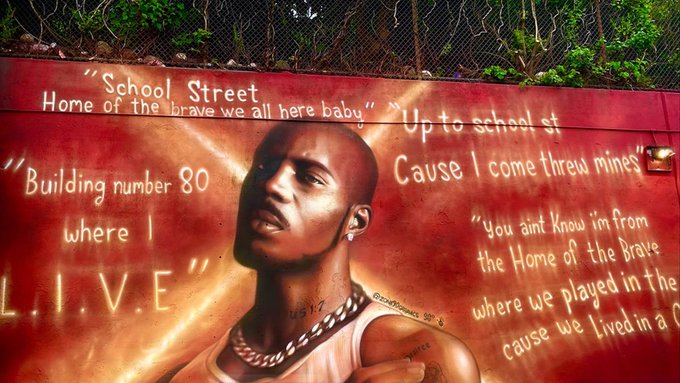 Earl Simmons, the troubled rapper and actor known as DMX (Dark Man X) has gotten many accolades and praises since his untimely death earlier this year. Another honor has been done in his name, this time in his hometown of Yonkers, New York.

The rapper, who died on Friday, April 9 at the age of 50 years old, has had a mural drawn for him that was recently unveiled.

According to TMZ, the mural of DMX was designed by NYC artist Floyd Simmons, who is not related to DMX. The artistry was displayed on a wall near the Calcagno Homes on School Street, which is the public housing complex where DMX had once lived.

First Look at DMX Mural Set to Be Unveiled in His Hometown https://t.co/1WqUD72x4g

According to NBC New York, Simmons, the artist who drew the mural, was the same artist who created a mural honoring Harlem’s own, Big L. That mural appears on 139th and Lenox in Harlem. Simmons is also credited with painting the mural on the hood of the ’64 Impala in Mariah Carey’s music video, “Heartbreaker” Remix.

Several days ago, it was reported that an analysis of the rapper’s urine determined that cocaine was present in his body. He reportedly suffered a cocaine-induced heart attack. However, a coroner did not perform an autopsy. Police and medical professionals did not list a cause of death.

“His death literally happened immediately because the brain was dead,” explained a source. “So obviously, there were a number of days where he was on ventilatory support and so forth in the hospital. However, he was diagnosed brain-dead early on…He never woke up from [a coma].”

It was also reported that despite prior speculation–DMX did not have COVID, nor was he vaccinated.