The Owners of Harlem Brewing Co. Share How To Enjoy Craft Beers 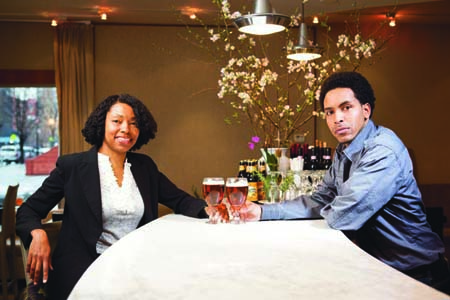 Many think of beer as a great complement to pizza or barbecue for an informal gathering or while watching the game, but Celeste and Khouri Beatty are among a growing set of craft brewers and enthusiasts elevating not only the taste but the status of this popular beverage. The Beattys, owners of Harlem Brewing Co. (www.harlembrewingcompany.com) and makers of Sugar Hill Golden Ale, believe that craft beer is part of an “evolutionâ€ in the domestic category. They may be right. According to the Brewers Association, overall U.S. beer sales were down 2.2% by volume in 2009 and 2.7% for the first half of 2010. But growth of the craft brewing industry in the first half of 2010 was 9% by volume and 12% by retail dollars.

By definition craft brewers are small, independent companies whose beers are “very artisanal,â€ offers Celeste. “The beer involves a lot of flavor and creativity and is sourced from local ingredients. It’s very hands-on.â€ According to the Beattys, there is a growing trend in farm-to-table beer where collaborations between local farmers and restaurateurs result in recipes for food and beer.

Here’s what to look for as part of a craft beer experience:
Tasting Notes As with wine, “there are probably 50 or more flavors and other characteristics of beer,â€ explains Celeste.
Tastes can range from fruit to chocolate and include wild berries, honey, spices, and even sweet potatoes. Khouri, who is the company’s beer chef, adds beer to a variety of recipes (e.g., meatloaf), where the flavors of barley and hops enhance the taste.
Glass vs. Bottle Both say it depends–although Celeste prefers the bottle. Khouri enjoys the elegance of a glass. “When you drink from a pint glass,â€ he says, “you get an overall experience, similar to drinking wine.â€ There is the taste and the aroma. “You get to see the head,â€ he adds, which he says should be the width of two fingers and last for at least a minute. “If it falls flat,â€ adds Celeste, “the beer may be old.â€
Expiration Date Beer does have a shelf life. Craft beer, which tends to be all natural, will last six to eight months. Beers with preservatives can last up to a year or more.
Celeste believes the variety of flavor and creativity in craft beer makes it the perfect drink for guests. “There are so many options that are surprising and flavorful.â€