A State-by-State Breakdown of the Gender Wage Gap 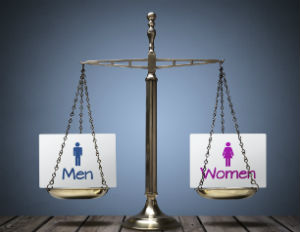 April 12 marks Equal Pay Day, and despite progress having been made, women still make 79 cents for every dollar paid to men. Nationally, the median annual salary for full-time working women is $39,621, while the annual pay for full-time working men is $50,383. When it comes to race, that gap widens even further with African American women and Latina women being paid 60 cents and 55 cents, respectively, for every dollar paid to white men.

“At a time when women’s wages are so critical to the economic well-being of families, the country is counting on lawmakers to work together to advance the fair and family- friendly workplace policies that would promote equal pay. There is no time to waste,” said Debra L. Ness, president of the National Partnership.

According to research from the National Partnership for Women & Families, women employed full-time in the United States lose a combined total of nearly $500 billion every year due to the wage gap. If the annual gap were eliminated, women in the U.S. would have enough money for 83 more weeks of food for their family, seven more months of mortgage and utility payments, 11 more months of rent or nine more months of birth control.

Providing a breakdown of the wage gap between men and women across the nation, the National Partnership found that pay inequality exists in every state, including the District of Columbia.

“It is unacceptable that the wage gap has persisted, punishing the country’s women and families for decades,” added Ness. “Some state lawmakers have taken steps to address the issue by passing legislation to combat discriminatory pay practices and provide other workplace supports. It is past time for federal lawmakers to do the same. We need Congress to pass the Paycheck Fairness Act, which is a common sense proposal that has languished for much too long.”

The Paycheck Fairness Act, which President Obama has called on Congress to pass, will close gaps in the Equal Pay Act, help to break patterns of pay discrimination and establish stronger workplace protection laws for women.

According to the below chart, Louisiana, Utah and Wyoming currently have the largest gender pay gap in the country, while the District of Columbia has the least.

With the goal of moving towards a more equal workforce, research from the McKinsey Global Institute found that $4.3 trillion could be added to the country’s economy in 2025 if gender equality is reached.