Like It Is Host Gil Noble Is Honored After Death 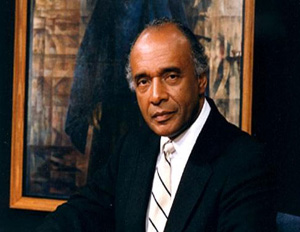 Black journalists lost an inspirational role model, pace setter and television news icon when Gil Noble, the long-time producer and host of WABC-TV New York’s Like It Is, passed away on April 5, 2012, at 80, due to complications resulting from a stroke he suffered last year. For more than 40 years, Like It Is was one of the few shows (along with WNBC-TV New York’s Positively Black and FOX New York’s The McCreary Report) that African Americans could trust to tell the stories and cover issues of importance to us. It’s not a stretch to say that shows like Our World with Black Enterprise are direct descendents of Like It Is. And Noble, along with original Like It Is co-host Melba Tolliver, inspired several generations of African Americans to believe that a career in television news was achievable, even in the nation’s No. 1 media market.

Under Noble’s direction, Like It Is covered issues that were routinely ignored and dismissed by mainstream television news. The show also interviewed African Americans and Black people from throughout the global Diaspora, ranging from Dizzie Gillespie to Fannie Lou Hamer to Zimbabwe head of state Robert Mugabe, at a time when people of color were virtually non-existent in television news, outside of athletes, entertainers, and coverage of civil rights uprisings and criminal activity. In fact, Noble broke into television journalism when he was hired by WABC-TV to cover the Newark (N.J.) riots in 1967. Like many Black television reporters of his generation, he was hired primarily because White reporters lacked the courage, relationships and skills to report thoroughly and accurately on what was happening in Black urban communities. Noble would go on to earn seven Emmy Awards and several honorary doctorates. He also created notable documentaries on such topics as Malcolm X, W.E.B. Dubois, Hamer, and Charlie Parker. For me, his most memorable documentary effort, Essay On Drugs, kept me and thousands of others of my generation from trying addictive and illegal drugs, deglamorizing drug abuse by giving viewers a horrifying and haunting close-up look at addicts shooting dope into their veins in a heroin den.

My first ever television appearance, and the first time I ever met Noble, was as a guest on Like It Is in November 1982, when I was a 22-year-old undergrad at Rutgers University. I was selected to represent Rutgers for a show Noble devoted to interviewing Black student leaders at colleges and universities in the New York metro area. The show made me a celebrity in my home town of Long Branch, N.J.; a decade later, friends and family members would still stop me on the streets whenever I visited home to remind me that they’d watched the show. My printed transcript of that episode remains one the most prized mementos of my career. Over the ensuing three decades, I would appear on the show regularly. The last time was several years ago; I was accompanied by my “assistant,â€ my then 15-year-old son.

For most of the past two decades, Like It Is remained on the air by the sheer force of will of Noble and Black viewers who remained steadfastly loyal to the show, even as their numbers dwindled. Attempts by WABC-TV to kill the show over the years were swiftly thwarted by protests and vocal campaigns to keep the show on the air, making it fairly obvious that Like It Is would continue only for as long as Noble was alive and able to produce and host the show. Since Noble suffered his stroke last year, Like It Is has been replaced by Here and Now. The show, which covers local news stories impacting the Black community, does not have a permanent host.Â  Instead African American reporters from the station’s Eyewitness News team take turns hosting the show from week to week. However well-intentioned, Here and Now is strictly “check the boxâ€ programming; a shadow of the hard-hitting interviewing and reporting that was Like It Is at its best. Noble, and all of the many producers, guests, reporters and others who are part of the show’s 40-year legacy, deserve better. I remain hopeful that someone will pick up the baton and continue the race so well-run by Noble.

As for me, I am eternally grateful for my opportunity to appear on Like It Is nearly 30 years ago, as I told Noble during a conversation in my office at Black Enterprise, when I was the magazine’s editor-in-chief, about 13 years ago. By then, as now, I’d become a regular guest on national television ranging from BET and PBS to CNN and MSNBC. I owe every appearance to the confidence instilled in me by Gil Noble, who reminded me of what he told me and my fellow student leaders as we left the set of Like It Is in 1982: “Thank you for all that you’re doing for our people. You’re going to do great things. I’m proud of you.â€