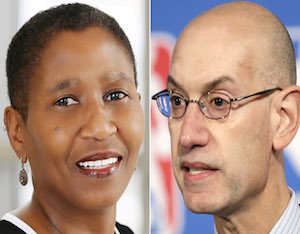 Yesterday, the NBA commissioner disagreed with Roberts’ comments that she made to ESPN: The Magazine. The argument stems from the upcoming contract dispute pegged to the billion dollar TV deal the NBA recently was rewarded. Roberts expressed displeasure for max contracts, the rookie wage scale and, of course, the salary cap, which she deemed as “incredibly un-American.” She also pledged to fight for shortening the NBA season.

In the written statement, Silver argues that the salary cap has helped the NBA grow into a global force and helped athletes to earn top dollar. The newly minted commissioner also turned down the idea that there was anything “un-American” about how the NBA pays its players. “We couldn’t disagree more with these statements. The NBA’s success is based on the collective efforts and investments of all of the team owners, the thousands of employees at our teams and arenas, and our extraordinarily talented players. No single group could accomplish this on its own. Nor is there anything unusual or “un-American” in a unionized industry to have a collective system for paying employee—in fact, that’s the norm.”

The salary cap, which has been in place since 1982, has enabled NBA owners to dictate terms as to which players are able to become highly paid professional athletes. With the upcoming discussion about the Collective Bargaining Agreement to take place during the 2016-17 season, all parties involved are hoping to discuss the circumstances to stave off a potential lockout.