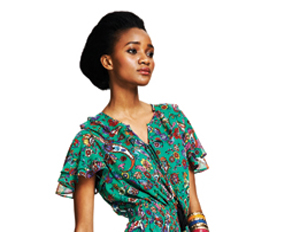 Welcome to the Style Suite with KÃ©la Walker, your source for fashion and style trends for power plays in the workplace. Every Tuesday and Thursday, she’ll share tips and suggestions to help maximize your style on a budget. Whether you’re the style devil in Prada or the apprentice with limited apparel, you’ll find something in the Style Suite to suit your needs.

You know I love a great designer collaboration. It seems like every other month I’mÂ raving about some great new partnership between a designer and a department or chain store. Just as the buzz for one line dies down or sells out, another one hits the racks. Well, it’s time for another one, except this time around, instead of a look-for-less line from the usual stores, thisÂ one is from an unexpectedÂ source: JC Penney.

Let’s be honest. When you think of JC Penney, it’s not for their designer apparel. But that’s about to change. This month alone, the retailer has introduced two designer collections, and we’re only on the fifth day. One collection, Pearl, created by one half of the design duo Marchesa, provides an array of pretty girl dresses from the red-carpet favorite. Unlike the higher priced versions you see worn by the likes of Zoe Saldana and Viola Davis, this collection tops out at $250—perfect for any upcoming fancy events on the calendar.

Designer Duro Olowu—who you may not know but is a fashion force no less—is the second designer to launch anÂ exclusiveÂ collectionÂ at JCPenney this month. The London based, Harlem, N.Y., resident has produced a scaled down version of this namesake line that is a favorite of First Lady Michelle Obama. Â Known for his play with color and master mix of prints and pattern, Olowu’s collection for JCP is filled with lady like styles that will fit well in the work place. More than just apparel, the collection features everything you could want from a designer: accessories, shoes and even home goods.Â The best part is, it’s super affordable, with most pieces priced around $30. On the day of its release, I checked it out and already there were limited quantities in store. Â I was advised to go online to make a purchase before the collection completely sells out.

While JC Penney may be creating a fashion frenzy now, they’ve actually been vying for this attention for quite some time. Leading fashion designer Nanette Lepore launched a junior line earlier this year and Nicole Miller’s diffusion line, Nicole, has been a staple at the retailer for a few years. Later this month, JC Penney will add Canadian brand Joe Fresh to its floors further expanding on their Â fashion for the masses plan. Combine that with the countless other amazing fashion deals I stumbled upon while in the store and I think it’s safe to say a lot more of us will be looking to JC Penney for hot fashion.

KÃ©la Walker is an award-winning, Emmy-nominated producer and TV host, who has contributed lifestyle and entertainment content for outlets including NBC’s LXTV, Getty Images, YRB Magazine, Madame Noire, and RTL Germany. She also has a passion for fashion and offers the latest in fab fashion trends and consumer deals withKelasKloset.com. Her chic style and trendsetting blog has been lauded by sites including Essence.com and Huffington Post Black Voices.

KÃ©la Walker is a New York-based, Emmy-award nominated producer and TV host, who has contributed lifestyle and entertainment content for outlets including NBC's LXTV, Getty Images, YRB Magazine, Madame Noire, and RTL Germany. She also has a passion for fashion and offers the latest in fab fashion trends and consumer deals with KelasKloset.com . Walker has been lauded for her style sense and trendsetting blog by sites including Essence.com and Huffington Post Black Voices.