If you have to see one motion picture this weekend or place a film on your must-see list of fall films, I wholeheartedly recommend Marshall. As the title suggests, the movie is about Thurgood Marshall, the iconic civil rights attorney for the NAACP Legal Defense Fund who used the courtroom to break racial barriers and help decimate institutionalized Jim Crow when he won the 1954 Supreme Court decision in Brown v. Board of Education, which declared state laws that established segregation in schools to be unconstitutional. It is fitting that the movie is being released on the 50th anniversary of Marshall being named the first black Supreme Court justice.

Directed by the Acclaimed Reginald Hudlin

I had an opportunity to attend an advance screening of the movie and found Marshall to be not your typical biopic. It features Marshall as a young attorney for the LDF in pre-World War II America, battling for justice in one of his less publicized cases—an African American chauffeur accused of rape and attempted murder of a wealthy white socialite in Greenwich, Connecticut.

Helmed with a blend of pulsating energy and nail-biting suspense from acclaimed director Reginald Hudlin, the movie is a legal thriller; an interracial “buddy film” of a partnership fused by a shared mission in the face of insurmountable odds and a commentary on social and criminal justice that’s powerfully relevant today in an era marked by Black Lives Matter and racially divisive politics.

Hudlin decided to cast Chadwick Boseman as the legal legend-in-the making—noted for his performances in biopics on baseball trailblazer Jackie Robinson (42) and “Godfather of Soul” James Brown (Get on Up) as well as his starring role as T’Challa in the upcoming Marvel Comics superhero blockbuster The Black Panther—for the lead role. Although Boseman bears no physical resemblance to the lighter hued Marshall, he plays the role with a mix of strategic intelligence and tenacious swagger—Shaft with a briefcase—that’s compelling to watch on screen. Other cast members—Josh Gad, Sterling K. Brown, and Laura Dern—play pivotal roles and offer bravura performances.

Hudlin himself displayed his own brand of resilience and negotiating prowess to get Marshall produced. Hudlin received the material from top producer Paula Wagner and after he decided to create the movie, he says the project was turned down by every Hollywood studio. Undeterred, Hudlin made contact with Chinese-based Super Hero Films Ltd. and through interpreters negotiated full financing for the movie’s $10 million budget. “They loved the script and embraced this movie about a hero,” recalls Hudlin. “Once I received the financing, I filmed the movie without any further discussions about my approach or aspects of the production, which rarely happens. Super Hero Films were amazing partners.”

I spoke with Hudlin—in complete transparency, he’s a long-time friend and business partner of Milestone Comics—about why and how he brought Marshall to the big screen.

BLACK ENTERPRISE: In terms of just the richness of Thurgood Marshall’s life and career, why focus on this slice? What engaged you to produce this film about this case and how did it come to you?

Reginald Hudlin: When you look at his whole life, it’s so full of adventures and achievement that you really can’t make a two-hour movie. It’s really more of a mini-series. When we talk about the film, we talk about the historical importance. What gets lost in the conversation is that it’s a really fun movie. People laugh a lot more than they think they’re going to laugh. They get a little choked up, and then they’re cheering. It’s a surprisingly good date movie. I don’t want people to go because they feel an obligation to support the movie or they feel like they have to go learn something. I think they should go and expect to have a good time, and then they’ll turn up. They actually got some insights they didn’t expect, but it first and foremost is entertainment, and that’s what we deliver.

In terms of distribution, are you looking at other platforms for Marshall, so that it would gain further traction with audiences? For much of 2017, box office has been flat in part due to competition from all these other platforms. So, how did that play into the marketing and business strategy with Marshall?

It is true that it’s been sort of a depressed year for movies in general, but let me point out a counter-trend. Hidden Figures, Get Out, Girls Trip. Those films have all overperformed compared to expectations, and part of that is that black ones are always underestimated and it also says, general audiences are more open to films with black leads because they look interesting and different. They are interesting. They are different. All three of those movies brought in very big mainstream support.

Do you also believe what will work for Marshall is that historical content seems to be very resonant with millennials? There’s a social consciousness in recent years that continues to be demonstrated by that segment.

Well, I think part of it is reflected on the times. Clearly, when you look at what’s happening politically in the country right now, and actually even globally, we’re at this pivot point. Sometimes to understand the future, you have to look at the past and just say, “OK. Here’s what happened in our last pivot point, so what can we learn from that in terms of what we need to do for the future?”

What is the continued marketing plan? Is there an approach similar to the release of the film Selma in which African American businesses financed students and younger people to see that film? How will you seek to gain greater traction and exposure for the film?

The movie has a modest budget. We’re being distributed by a relatively small studio, Open Road, so we’re using a combination of things. There’s a heavy focus on digital marketing. There’s been a lot of press because it’s a movie that people want to talk about, and want to talk to the stars about, talk about the movie’s broader implications, and the traditional television advertising and so on. So, it’s a mix of those elements. I’ve been working with big studios for quite some time so it’s kind of a shift back to the old school but we’re being very aggressive about it. We’ve been doing a lot of screenings. We’re very excited that we’ve arranged screenings for 11th and 12th graders in 20 different cities. They get to see the film. We’re providing the schools with educational materials, so they can talk with the kids about the movie and the times, so we’re really doing not just really promotional streams, but doing educational streams as well.

Even though Super Hero Films provided full financing for the film, you said you had a small budget. How were you able to get it made and give it a big budget feel?

We started with a $10 million budget, which is modest, but we feel like we got a lot of movie for our dollar. We got fantastic production value, great costumes from the award-winning Ruth Carter. We got the cinematographer who shot all the X-Men movies. So we didn’t cut any corners in terms of the quality of the work. We just did it with what we had.

We filmed a 140-page script in 30 days. Normally, Hollywood films would shoot three to five pages a day so we were going at an incredibly fast clip. Fortunately, I know how to do that without compromise. You just figure out how, and a big part of that was having rehearsals with the actors, so we did so much of the work before we got in front of the cameras, so everyone knew what they were doing. When you have world-class actors like that, they can make it happen.

You’ve identified some actors who definitely have gained great exposure recently when you look at Chadwick Boseman and Sterling Brown. Josh Gad is also someone who brings another bright spotlight.

I just feel very fortunate that the actors saw the material and said, “Wow, this is the kind of movie we want to be involved in.” That makes all the difference. 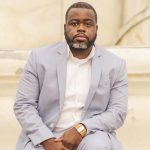 BE Modern Man: Meet ‘The One’ Terrence Nelson