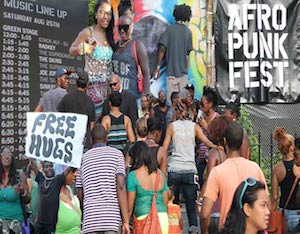 Marking its 10th year of exciting, culture-defining entertainment, the 2014 AFROPUNK Festival returns to Brooklyn’s Commodore Barry Park on Aug. 23 and 24.

For those who have never attended or heard it, the event was founded in 2002, and quickly became what the New York Times has called, “the most multicultural festival in the U.S.” AFROPUNK itself has become synonymous with open-minded, non-conforming and unconventional energies, and those who attend will experience an alternate world unlike ever before.

Aside from the famously diverse and eccentric crowd, AFROPUNK is known for being the premiere destination for music’s most innovative and intriguing acts. The website recently announced its “Round 2” of its infamous lineup, highlighting D’Angelo‘s return to Brooklyn after his stint at the Red Bull Music Academy engagement.

As headliner, the soulful crooner will be joined by Shabazz Palaces, Gianni Lee, $1 Bin, The Internet, Trash Talk, and many others. If you want to catch the culture wave, or just want to see what all the hype is about, then check out the full artist list below and make sure you’re there on Aug. 23 and 24 at Brooklyn’s Commodore Barry Park.