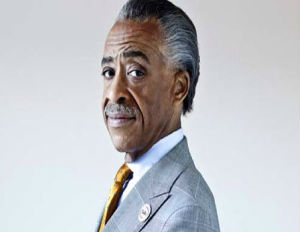 After Monday’s grand jury decision not to indict officer Darren Wilson in the death of teen Michael Brown, Rev. Al Sharpton traveled to Ferguson for a news conference to address the disappointing announcement.

Joined by members of the National Action Network, Brown’s family attorney Benjamin Crump and Michael Brown, Sr. at the Greater St. Mark Family Church in Ferguson, Sharpton told the public that the grand jury’s decision will not end their fight for justice.

“Let the record be clear, you have broken our hearts, but you have not broken our backs. We will continue to pursue justice,” said Sharpton.

The civil rights activist said that it was irresponsible for officials to release the decision at night and that those who are reacting in a destructive manner are not representative of Mike Brown.

“If you’re on Michael Brown’s side, you walk with dignity. Don’t lower your standards,” said Sharpton.

While Crump agreed that he does not condone the violent acts following the jury’s decision, he also made it clear that the violent act that took place on Aug. 9 that killed Michael Brown, Jr. are also not condoned and that they are prepared to take matters further in bringing about justice to the Brown family.

“Before you think this is over, remember what happened to Rodney King,” said Crump. “We may have lost one round, but the fight is not over.”