Alphabet Masters the ABCs of Profit While Apple Causes Concern 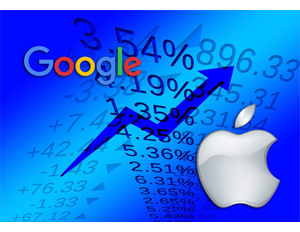 Most of the major tech companies released quarterly earnings this past week and as usual, some met or exceeded analysts’ expectations while others fell short.

Google and Apple made the most money of any in Big Tech; however, industry analysts are judging the two quite differently–with high praise for Google and some eyebrow-raising at Apple.

The most significant takeaway from the earnings reports: Google’s restructuring with Alphabet now as its parent company; its willingness to tackle so-called “moonshotâ€ projects including autonomous vehicles, Project Loon Internet balloons and solar-powered Internet drones; smart acquisitions such as those it made of YouTube, Nest and Android; plus, its shrewd foresight in shifting its big money-maker–ads–to mobile search, have made it the most valuable company in the world, unseating Apple.

Take a collective look at the earnings reports of tech companies that fared best and a pattern emerges. They’ve typically been in existence over a decade (Apple, Microsoft, and Google) and they’ve successfully transformed past business models to fit today’s computing demands. Google’s bet that people would soon primarily search the web on mobile devices paid off for its ad business—for the first time last year, mobile searches exceeded desktop.

Google redirected focus from the desktop to mobile even while facing criticism from analysts and industry watchers.Â CNN Money perfectly summed up what many were thinking last year about Google’s mobile fixation: “If only Google could turn around its miserable mobile business, everything would be splendid.â€

How satisfied Alphabet shareholders must be that Larry Page and Sergey Brin didn’t heed the naysayers. Google reported fourth-quarter earnings of $21.33 billion. Sales rose 18% from 2014 and ad revenue increased 17%.

As for Windows Phone…from Microsoft’s earnings reports, sales declined 49% from last year. Microsoft has been repeatedly taken to task for jumping into the mobile space too late. When Satya Nadella took over as CEO, one of his first acts was to tell Microsoft employees in a memo “We are moving from a strategy to grow a standalone phone business to a strategy to grow and create a vibrant Windows ecosystem that includes our first-party device family.â€Â Microsoft emerged an earnings winner thanks to Nadella’s leadership.

Even when you areÂ worth $538.3 billion, sometimes you still can’t win. Although the company made its largest quarterly revenue to-date, $75.9 billion, analysts expected Apple to make $76.54 billion.

While Tim Cook was upbeat about Apple’s earnings stating, “Our team delivered Apple’s biggest quarter ever, thanks to the world’s most innovative products and all-time record sales of iPhone, Apple Watch and Apple TV,â€ some analysts noted that a slow-down in sales of Apple’s iconic iPhone and iPad may have caused Cupertino to miss its mark. iPhone sales decreased last year in every market, with the exception of China.

CNBC reports that Mac and iPad sales were weaker than expected:
The tablets saw 16.1 million units in the quarter, compared to an expected 17.93 million, and Macs recorded 5.3 million compared to estimates of 5.8 million.

Are people bored with Apple products? Especially since recently highly-anticipated products from Apple have seemed to…fall flat. There are reports that the Apple Car project is on hold, and while Apple smartwatches comprise 50% of the smartwatch market, the market as a whole has yet to become really sizable.

Perhaps Apple has to not only reinvigorate an appetite for innovation, but may have to follow the lead of Google and push beyond innovation to develop technology that is truly transformational and almost in the realm of the ridiculously far-fetched.