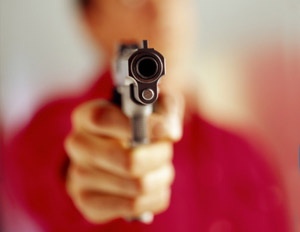 According to breaking news reports, Alton Sterling was shot and killed by two Louisiana police officers after an anonymous caller claimed he had a gun. The 37-year-old was unarmed and allegedly selling CD’s before he was brutality gunned down.

Perhaps the only positive takeaway is that a bystander captured the grim moment on video, so it could be shared on social media. The gunfire sparked impassioned protests that continued past midnight outside the convenience store–the location of his death–for 24 hours after the 12:35 a.m. fatality.

More than 100 gathered, shouting “No justice, no peace!” in addition to setting off fireworks in protest of the undeserved killing.

Federal authorities are currently investigating.Â CNN reports that the president of the NAACP’s local branch is calling for the city’s police chief and mayor to resign.

Take a look at how people are responding on Twitter below: