Alton Sterling: What We Know So Far 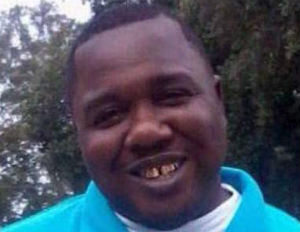 On Tuesday morning, Alton Sterling, 37, was shot to death by Baton Rouge police officers; as shown in a 48-second cellphone video that has since gone viral.

Here’s what we know so far:

Alton Sterling, also known to friends and frequent customers as the “CD Man,” was standing outside of a Triple S convenience store when the Baton Rouge police arrived to the scene at approximately 12:25 a.m.

According to a statement released by BRPD spokesman Corporal L’Jean Mckneely Jr., the officers were responding to an anonymous “disturbance call from a complainant who stated that a black male who was selling music CD’s and wearing a red shirt, threatened him with a gun.”

AsÂ the officers successfully pinned Sterling to the ground while simultaneously tasing him, one of the officers yelled the words, ‘He’s got a gun.’

An officer then told Sterling, “If you f-cking move, I swear to God!â€

After a few more seconds of yelling, another officer then proceeded to draw his weapon and shoot Sterling multiple times.

“An altercation between Sterling and the officers ensued,” the BRPD statement reads. “Sterling was shot during the altercation and died at the scene.”

An autopsy performed on Tuesday, confirmed that Sterling’s death was a homicide, caused by multiple gunshot wounds to his chest and back.

The Advocate spoke to Abdul Muflahi, the owner of the Triple S where the killing took place.

According to Muflahi, who referred to Sterling as his friend, Sterling had “just started carrying a weapon a couple of days ago after a couple of his friends that sell CDs at different locations were robbed.”

Muflahi told the Advocate Sterling’s hand was “nowhere near his pocket” as he was pinned to the ground and tased by police.

Muflahi continued that he never saw Sterling’s gun until the police pulled it from his pocket, “after they shot him and he was just laying there dying.”

Muflahi also told the Advocate that the officers “were really aggressive with [Sterling] from the start,” and that one of the officers had said “just leave him” in reference to Sterling’s body.

Check out the Advocate’s interview with MuflahiÂ here.

Following Sterling’s death, members of the community took to the streets in a peaceful protest. Some gathered with signs outside of the Triple S store where Sterling was killed.

In an emotional press conference on Wednesday,Â Quinyetta McMillon, the mother of Sterling’s first-born child Cameron, grieved over the fact that Cameron would grow up without a father.

As Cameron sobbed at her side, McMillon vowed that she would not rest “until the adequate punishment is served to all parties involved.”

Referring to Sterling’s death as a “horrible tragedy,” Baton Rouge Police Chief Carl Dabadie Jr. insisted he would be “demanding answers” from the officers involved.

However, as the Advocate reports, Dabadie does not plan to heed the mounting calls for his resignation.

While Sterling’s grieving family and friends willingly engaged with the press in an attempt to share positive memories of his life, some outlets chose to purposely dehumanize his death.

Raw Story’s David Edwards called out CNN’s coverage for using an old mugshot of Sterling, when there are multiple other photos available on his various social media profiles.

As Edwards also pointed out, CNN’s Alisyn Camerota was seemingly obsessed with forcing Sterling’s grieving aunt to discuss his past criminal history.

Two of the officers, who have since been identified as Blane Salamoni and Howie Lake II, were placed on paid administrative leave.

According to District Attorney Hillar C. Moore III, the officers feel “they were completely justified,â€ in killing Sterling. At a press conference on Wednesday, Louisiana Gov. John Bel Edwards announced that the Department of Justice would be taking over the investigation.

Calling the video depicting Sterling’s deathÂ “disturbing,â€ Gov. Edwards insisted that “there should be no doubt in anybody’s mind that this is going to be investigated impartially and thoroughly.â€