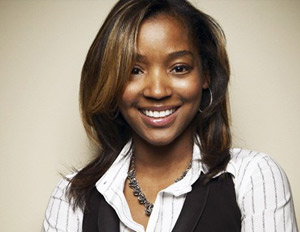 Finding a distribution platform is very often the most difficult part of filmmaking. Now that advances in technology have made making a film a relatively easy process, finding an audience for that work has remained elusive for most filmmakers, especially independent. In her role as the Vice President of Specialty & Alternative Content for the influential AMC Theatre chain, Nikkole Denson-Randolph plays a critical function in providing independent filmmakers with the opportunity to find a following for their work.

A former Director of Business Development for the Starbucks Coffee Company, where she fielded, developed and negotiated music, film and book offerings for Starbucks Entertainment, Denson-Randolph was also the President of Magic Johnson Entertainment and President of Magic Hallway Pictures. Over her nearly 20-year career, she has earned a much-deserved reputation for creating and executing strategies for successful entertainment brands.Â BlackEnterprise.com caught up with Denson-Randolph to discuss access and opportunity for independent filmmakers.

What kind of criteria does your team consider when evaluating films for AMC independent (AMCi)?

The film should be independently produced.Â  From there, we evaluate the quality of the film, (story, performances, direction), as well as a detailed marketing plan, and the necessary resources and budget to support it.Â Quality storytelling is important to us, but for a movie to succeed, it’s just as imperative that the intended audience knows the film is available to them.Â  In the spirit of supporting independent filmmakers and ensuring we can provide a platform for content that may not otherwise have had an opportunity to be experienced on the “big screen,” we do not require a substantial amount of marketing and distribution dollars.Â  However, we must be convinced that the filmmakers are going to leverage their film strategically, effectively and deliberately.Â  We have several success stories from filmmakers that did not have the deepest of pockets, but had conviction and commitment toward disseminating the message about their work to both wide and specified audiences.

Has technology introduced new opportunities that makes it easier for filmmakers to release their work independent of established movie houses?

Technology has definitely made filmmaking more accessible and affordable, however, a filmmaker’s job is not done once the film is complete. The distribution of a film is a significant effort and filmmakers must decide whether to distribute the film themselves, or find an independent distributor to do the job for them.

If they want to distribute the film on their own, a budget is needed that will allow for effective marketing and promotion. Additionally, there are costs associated with delivering the film, trailers, and one sheets to the theatres.Â If they plan to partner with a distributor, filmmakers need the proper resources to prepare the film for festivals and special screenings that will draw potential suitors.