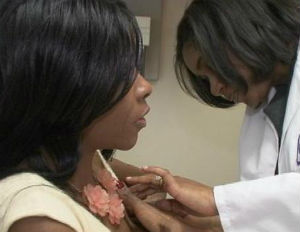 According to reports, the American Cancer Society (ACS) said on Tuesday that women should begin mammograms later and have them less frequently than it had been previously urged.

This comes during a month when breast cancer awareness is advocated nationally with drives to promote early testing and diagnosis, and at a time when African American women are more likely to die from the disease than white women.

The organization has strongly promoted screening in past years, recommending that women aged 40 and older have mammograms and clinical exams every year. But now it has issued new guidelines that recommend women with an average risk of the illness to start having mammograms at age 45 and continue once a year until age 54, and then to be screened every other year for as long as they are healthy and expected to live another 10 years. ACS also says that women of any age who have had no symptoms or breasts abnormalities no longer have to get clinical breast exams, in which doctors or nurses feel for lumps.

There is increased evidence, according to experts, that mammography is less useful in younger women, and that it has inconsistencies, such as false-positive results that lead to additional testing and sometimes biopsies.

TheÂ new guidelinesÂ were published in the Journal of the American Medical Association, and some organizations and advocates are not in agreement with them, especially those advocating for minority, and specifically black, women.

The Mayo Clinic indicates that breast cancer affects black women earlier than other groups and the tumors are more aggressive. Another issue among black women is that they’re less likely to take action early enough.

The proposed new breast cancer screening guidelines could be deadly for black women. Join us 9/15 to fight back! http://t.co/N8hpuE29Ar

When reports emerged in April that the United States Preventative Task Force was advocating for later mammograms for women, Linda Goler Blount, president and CEO of the Black Women’s Health Imperative, spoke out, concerned that such a recommendation would put black women at further risk of dying from the illness. “Any time scientists can’t or don’t agree, it gives some men and women an excuse not to do something that could very well save their lives,â€ she said in an interview. “As a very good friend said, ‘If the scientists can’t agree on when I should have a mammogram, then why should I have a mammogram?’â€

Each year 6K black women die from breast cancer-if we had the same death rate as white women 2,400 fewer would die http://t.co/pMkUELUzlK

How do you feel about ACS’s decision? Let us know in the Comments below.