From 'American Crime Story' to Co-Starring With Oprah and Tom Cruise, Actor Courtney B. Vance Reflects on His Career 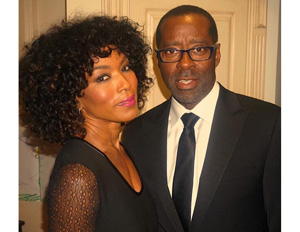 Though he’s been acting for more than 30 years, Courtney B. Vance credits his award-winning performance as Johnnie Cochran for the FX series The People v. O.J. Simpson: American Crime Story with pushing his already successful career to the next level. Now, Vance will be co-starring with Tom Cruise on the big screen in the upcoming summer blockbuster reboot of The Mummy.

In his role as Army Colonel Greenway in The Mummy, Vance is charged and challenged with keeping Cruise’s character, Nick Morton, in line. Shot in various locations, including Oxford, Surrey, and London in the United Kingdom, the film wrapped production in Africa.

On Working With Tom Cruise

Vance says working with Cruise and the cast of The Mummy has been one of his greatest experiences on set.

“Tom Cruise is one of the most wonderful, kind, and generous men that I’ve ever met,” he says. “He took care of us on the set in London. Everybody had organic food, coffees, and teas—on the set, we didn’t do the traditional lunch and dinner breaks. During the production, there was continuous shooting, but you’re [also] continuously on a break. So, you can go and get an organic pizza slice or organic juice; healthy and organic food is brought on the set all the time. When we went to Namibia to finish the final month of shooting, [Tom] brought that whole [organic food] team out there for the entire time. When your tummy is full—even while shooting for long hours—you feel good.”

Vance says he was grateful that he had the opportunity to be included in this project, and that, after receiving the call from George Wolfe, he made himself available immediately. Wolfe and Vance had previously worked together, when Wolfe directed him in Nora Ephron’s Lucky Guy. A Broadway play, Vance played the role of James “Hap” Hairston alongside Tom Hanks, who played Mike McAlary. In 2013, Vance earned a Tony Award for Best Featured Actor because of his portrayal of this character.

“When that man calls me, I jump,” Vance says of Wolfe. “I said, ‘George, I’m so jammed right now, but when do you need me? Tell me where I’m going.’ I had a day or two to get my stuff together and go down there.”

The story of Henrietta Lacks had a profound effect on Vance. “The movie is devastating, because—once again—this is another situation where black folks were experimented on,” he says.”We’ve heard about it time and time again, the most famous being that Tuskegee Syphilis Experiment, which was well-documented, but there are others that people don’t know about.”

“The whole world was operating under the fallacy that people of color were inferior,” Vance continues. “It’s interesting that they were getting the blood from black folks, and found out that these cells—these strong, amazing, immortal cells—were from a poor black woman with five kids. Why weren’t they doing it for white people? If we were so inferior, why take blood from us?”

Vance recalls a particular scene with Winfrey, as Deborah Lacks, becomes distraught after discovering what they did to her mother. “I was destroyed. That scene, on the screen, devastated me,” Vance says. “The abuse that our people have taken for so many years [is devastating]. And when the credits roll, and [the audience] realizes that still—to this day—the family has not been compensated in any way, it’s a double tragedy.”

A devoted husband and father, Vance and his wife, actress Angela Bassett, are both experiencing a well-deserved upswing in their careers. However, nothing comes before family. The couple’s twins are now 11-years-old. Together, Vance and Bassett work closely together as a team to coordinate their work schedules in a way that ensures someone is always home to care for their children.

They also take care of Vance’s mother, who is battling Amyotrophic Laterals Sclerosis (ALS), a progressive neurodegenerative disease. “It’s a horrific disease where you have no control over your muscles, the main muscle being your diaphragm,” he says.

“However, we’re blessed to have our mother with us. She can spend her remaining days with us, surrounded by family, and not in a nursing home. We can see her on a daily basis, and the children can see her and see the cycle of life. She has a ventilator that breathes for her, but she’s still got joy. We all have our rhythm with her. Friends come by and spend time, too. So, we’re just grateful.”