An Irate, Scissor-Wielding Woman Robs Georgia Bank After Threatening Tellers Over Her ID 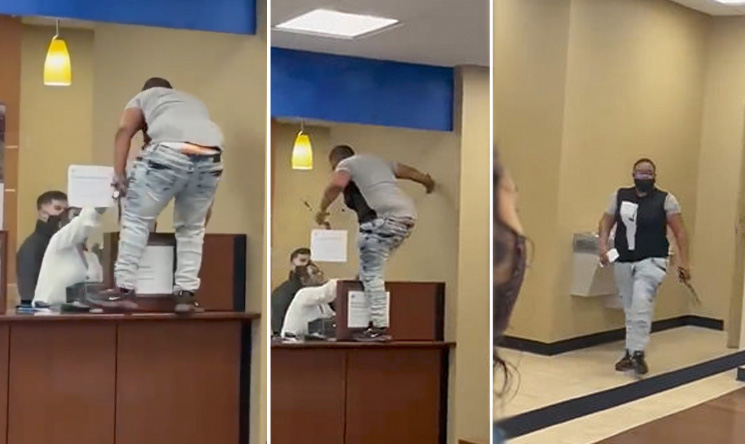 Police in Buford, Georgia finally caught a scissor-wielding woman who caused chaos, jumped a counter, and tried to steal $13,000 using a fake ID at a Chase Bank.

While the incident happened on Jan. 25, on Friday morning police finally identified the woman as 32-year-old Sarahdia Camell of Long Beach, California, CBS 46 reports. Camell ultimately stole $750 after fighting with tellers over her ID.

According to reports, Camell set it off and caused a scene, fighting with bank employees at the branch located on Buford Drive.

At issue, Camell tried to withdraw $13,564 from an account, according to Gwinnett County Police, but couldn’t provide the identifying information the teller asked for which included a credit card, account number, and license.

Camell then got irate as captured on bank surveillance video and cell phone cameras, jumped the counter, fought with cashiers, caused a scene, and stole $750 bucks, according to police.

““You gone take my motherf****** money? You gone sit there and take my money?” Camell said.

Customer jumps over bank teller demanding her money back at Chase bank in Buford after finding out her deposit went towards overdraft fees pic.twitter.com/4CqLOpDjIM

During the melee, Camell grabbed a pair of scissors and used them in a threatening manner toward bank employees before pocketing the petty cash, police said.

While bank employees tried unsuccessfully to stop Camell, David Nance, CEO of Security Equipment Corporation, and a self-defense expert said they should not have engaged her.

“Even if you’re an employee that works at that bank, I understand you want to help out the company that you work for but the best thing you can do is get away from that individual,” Nance told CBS 46.

“That amount of money is not worth a life, and scissors, that can be a deadly weapon.”

According to reports, Camell even asked onlookers in the bank to call the cops as she scooped up cash. Once she got the $750, police said she casually walked out of the bank as if nothing ever occurred.

The bank is located about 32 miles northeast of Atlanta. Luckily no one was hurt.