An Urgent Message For Millennials From A Former Hillary Clinton Surrogate 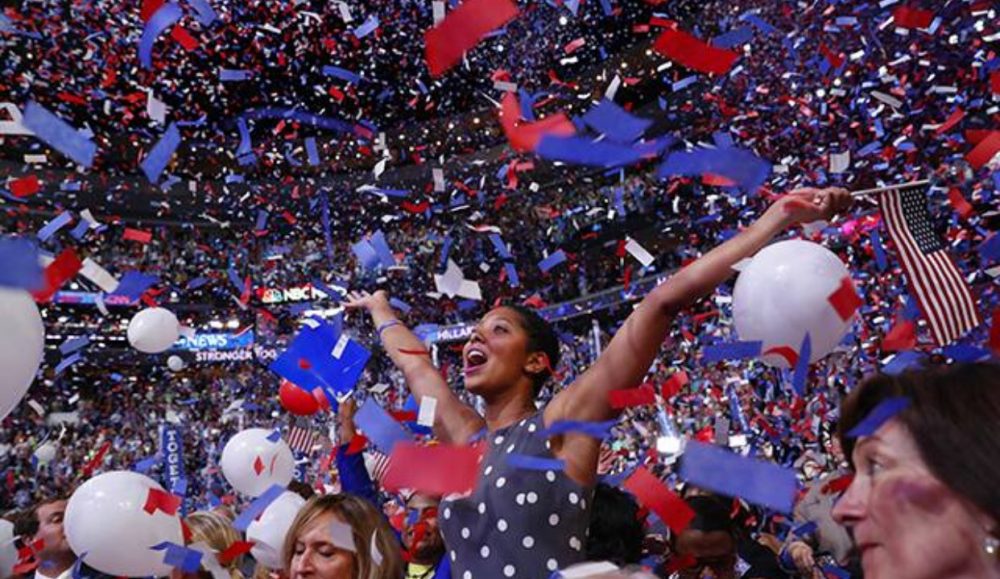 There’s no doubt that the November elections are an important matter and there’s one demographic that all are keeping a watchful eye over—the millennials—even more so, the minority voting millennials. New York native, former Hillary Clinton surrogate, and minority millennial herself, Maxine Outerbridge, is especially committed to seeing millennials show up to exercise their right to vote and has an urgent message for all millennials in the U.S.

Surrogate? What’s That & How Did She Become One?

Before we dive into the important message though, let’s clear a couple of things up. If you are unsure what a surrogate is and their role, I’ve got you covered. If you’re wondering how a young black female became so heavily invested in the Clinton campaign when Bernie was the crowd favorite, I have that answer for you, too.

Outerbridge identifies a surrogate as someone who speaks on behalf of the candidate, which typically involves speaking publicly or publicly supporting the candidate.

When I asked what caused her to stand so firmly with Hillary Clinton she said,

“I have been a longtime supporter of Hillary as I appreciated her leadership during the two terms she served as our state’s Senator, her efforts following the 9/11 terrorist attacks but more importantly, because I personally benefitted from CHIP (Children’s Health Insurance Program) that she advocated for as first lady. The CHIP program was instrumental in helping me stay in college as a teen mom because I didn’t have to worry about getting health insurance for my child (something I couldn’t get under the regular welfare system given I was a full-time student and had a full academic scholarship). At the time, I was not being supported by my family in any way and struggled a lot as a young mother so it meant a lot to me that she spent her entire career fighting for women, children, and families in general.”

With the aforementioned in mind, when the 2016 elections rolled around, she was heavily invested. One town hall she watched on television changed the trajectory of her life. In the words of Outerbridge,

“A young man stood up to ask [Clinton] a question but first insinuated reasons why he felt she was polling so poorly among young voters. I was so furious by this because I didn’t want him speaking for me. I wrote a letter to her campaign office in response to that town hall because I wanted her to know that she did have millennial voters. In my letter, I talked about all the things I overcame in my early adulthood, including being a teen mom, graduating college with honors (which I attributed to having services like CHIP), obtaining a CPA license, having a successful career in the finance industry and finding the courage to leave an abusive marriage.”

& The Rest Is History

A few weeks later, Outerbridge received a call from Clinton’s campaign asking to meet her and her children to do a short feature. One thing led to another and she kept getting more and more involved with the campaign. After Clinton met Outerbridge, her kids, and other members of her family, they hit it off and she was unofficially aligned as a surrogate. The campaign called on her as needed for various engagements with close attention on mobilizing the vote of women, people of color, and young people. She did several speaking engagements with the campaign, most of which addressed topics such as women’s health, healthcare, minority issues, and millennials.

As a surrogate, Outerbridge was featured in several volunteer initiatives and helped to organize events for millennials, all while frequently participating in media features, radio ads, and podcasts. In addition to these campaign commitments, Clinton chose Outerbridge to be the youngest delegate representing New York at the Democratic National Convention (DNC), which allowed her to personally vote for Clinton as the Democratic Party’s nominee. Outerbridge was also Clinton’s special guest at the first presidential debate where she sat in the front row next to Mark Cuban.

The Urgent Message for Millennial Voters

Outerbridge admits to being a little traumatized after the 2016 elections, noting that she doesn’t really work with the party directly anymore but is still committed to spreading important messages.

She believes that it is imperative that all stay informed and especially go out and vote.

When I asked if she had a message for millennials she shared,

“There is way too much on the line and way too many factors relevant in these upcoming elections that are going to affect our lives. The decisions that our legislators and elected officials are making are going to have a greater impact on us and our children than most of the people in office. We have some serious things to consider. The student loan debt situation is a clear bubble ready to bust, healthcare is in crisis mode, climate change is becoming an obvious threat, etc.”

I questioned Outerbridge about her thoughts on millennials who are discouraged, asking her advice for those that believe that all political sides are crooked and that it doesn’t matter who they vote for as nothing will change. She replied,

“I would tell my fellow millennials, I hear you and share your sentiment but we have way more power than you think. When millennials band together, use the power of social media and our other innovative tools, we can really hold our elected officials more accountable than any other generation has been able to before. Your vote does matter and as hard as it is to believe, we have really forced the discussion on corruption and inadequacy of government to be at the forefront of political discussions. So my advice would be don’t just vote and walk away. Stay on top of our elected officials. You can literally call and email them to ask about certain matters you voted on. Stay engaged in causes that matter to you by supporting related organizations, showing up to marches or other forms of activism and continue to voice your opinion vocally on social media. Lastly, if it really interests you and you have the right passion then you should get involved in politics yourself or at the very least, support other young progressive candidates to help them get elected. I am confident this new wave of young, diverse and progressive political leaders are going to eventually rid our government of fraud, waste, and abuse.”

What Millennials Should Know Prior To Voting

For many millennials, this will be their first time hitting the polls, so I wanted to get Outerbridge’s expert opinion on what they need to know. She advised,

“Your local government influences your day to day more than you know. The media likes to glorify the higher and more powerful elected offices so most people are only familiar with those names when they visit the ballot. It’s really important to look up who’s on the ballot for your upcoming election in your area and do some quick Google searches on these people. Get out of the habit of voting down the ballot just based on party. Especially because that doesn’t work when you’re voting during a primary (an election within your registered party) so you’ll need to know who these people are so that your vote can truly be reflective of your needs and positions on certain topics. “

When I queried specifically about young black women voting, Outerbridge shared the reason for urgency by stating,

“It means so much and that’s why I spoke at the March for Black Women, which took place on Sept. 30 in NYC, to highlight that importance. Black women have some of the highest voter turnout rates, yet are some of the least represented at all levels of our government. Black women are more likely to be living in poverty, be uninsured, face harsher punishment in schools or in the judicial system, get paid less and to experience domestic violence than their ]white] female counterparts. It is crucial that we engage politically so we can have our voices heard and to change some of these unfortunate realities for many black women in this country. I truly believe that black women are some of the most over-utilized but most disadvantaged groups in America. Black women are already performing their civic duty and voting out of responsibility, I just think we need to get more strategic and vocal, which, fortunately, seems to be happening more lately.”

While millennials happily share their quips and concerns relating to the current political environment online, it’s time to take that same energy to the polls (and later directly to the elected officials) for the betterment of all concerned. I asked Outerbridge if she had any final urgent messages that she’d like to share. She didn’t disappoint:

“I know we do everything online but at some point, we’ve got to get into a room together and talk through things, especially policies or positions that will have such a big impact on our future. Not everything you read online is true. Use social media as a tool but don’t let it be your demise.”

Maxine Outerbridge can be found on Instagram sharing motivational musings and insights on mental health.