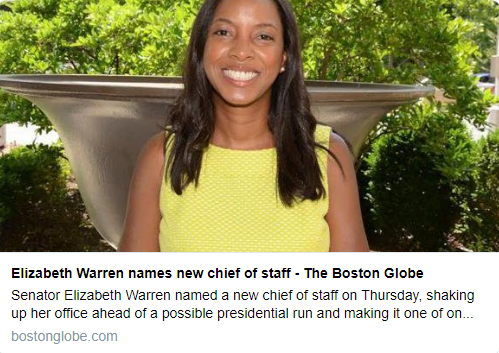 In addition to taking another step toward launching a presidential run in 2020, Sen. Elizabeth Warren has named Anne Reid as her new chief of staff, making Reid one of the few African Americans to lead a U.S. Senator’s staff. Reid is also the only black woman serving as chief of staff for a Democratic senator.

“Anne is a gifted leader and committed public servant,” Warren said in a statement released Dec. 27. “Anne’s experience serving our country and working to improve the health and well-being of millions of Americans will be invaluable as we continue our fights to level the playing field.”

The announcement that Warren tapped Reid for the position is being praised as a progressive step toward diversity by the Joint Center for Political and Economic Studies. “Black women play a critical role in our democracy, and Senator Warren’s appointment of a talented staffer like Anne Reid recognizes that Americans from all backgrounds can serve in a leadership role at the highest levels of government,” said Spencer Overton, president of the Joint Center.

“As we have seen so far during this hiring season, the face of senior staff in the House and Senate is changing because of members who recognize that it is not enough to have diversity in electoral coalitions. Diversity and inclusion must be the centerpiece of policymaking. It starts with staff,” added Don Bell, the director of the Black Talent Initiative at the Joint Center.

The move could be part of Warren’s effort to court black voters should she decided to challenge President Donald Trump in a bid for the White House next year. As for now, the Massachusetts senator has created an exploratory committee to test the waters before her potential run.

She was hired and promoted by Warren within two months

Reid began serving as Sen. Warren’s Senior Advisor in Oct. 2018, just a couple of months before she was named as the senator’s new Chief of Staff.

She worked for the Obama administration

Reid began her work in D.C. politics back in 2008, working as a congressional staffer in the U.S. House of Representatives under the Obama administration.

During this time, Reid served as a staff member and legislative analyst for the House’s Energy and Commerce Committee and the Oversight & Government Reform Committee for Democrat Rep. Henry A. Waxman. In her final year on the Energy and Commerce staff, she was the lead Democratic staffer covering public health agencies and issues.

Later, she went on to work as a counselor to U.S. Health and Human Services Secretary Sylvia Mathews Burwell, where she was a member of the senior leadership team during Barack Obama’s last years in office.

Reid previously served as a legislative assistant to U.S. Sen. Christopher A. Coons.

She has worked in the nonprofit sector

In Oct. 2017, Reid was named as the chief strategy officer at Vision To Learn, an organization that offers free eye exams and glasses to children in low-income communities.

She obtained a B.A. from Harvard and a Master’s from Chapel Hill

Reid holds a B.A. from Harvard University, where she majored in Hispanic Studies. She also holds a Master’s degree in Public Health from the University of North Carolina at Chapel Hill.