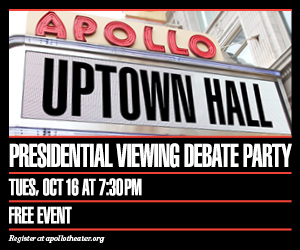 The Apollo Theater will present the second event in its newly launched Apollo Uptown Hall series with a free viewing party of the second presidential debate between President Barack Obama and Republican nominee Mitt Romney on Tuesday, October 16th at 7:30pm. Prior to screening the presidential debate, there will be a panel discussion with several respected political analysts, who will discuss issues important to the community, followed by a Q&A with the audience. The panel includes Esther Armah (WBAI-FM), Herb Boyd (The New York Amsterdam News), Michael Brendan Dougherty (The American Conservative), Mark Riley (WWRL 1600 AM), William Tucker [The American Spectator],Â  and Armstrong Williams (SiriusXM’s The Power). The panel will be moderated by Christina Greer (Fordham University, Political Science Assistant Professor). Those interested can register in advance at apollotheater.org.

Following the panel discussion, Black Enterprise Business Report Correspondent Shannon Lanier will lead the Q&A session, inviting the audience to participate in the dialogue. Black Enterprise will also cover the second of 3 presidential debates between President Barack Obama and Republican nominee Mitt Romney on Twitter, with respected writer and political blogger Zerlina Maxwell leading our Presidential Debate discussion. Follow us at @blackenterprise and use the hashtag #BEDebate2012 whenever you tweet.

Preceding the event, there will be live entertainment from soul jazz violinist/vocalist, Charisa the Violin Diva, as well as music provided by RhythmAndSoulRadio.com’s DJ, The Legendary Chris Washington.

“Since its inception, the Apollo Theater has served as a “town hallâ€ for local community residents as well as people from all across New York City,â€Â said Jonelle Procope, President & CEO of the Apollo Theater. “This has been demonstrated by the huge turnout and response to events such as the Bradley-Gore presidential debate and viewing event(s) during President Obama’s election campaign, and our first Apollo Uptown Hall event, ‘Vote Like Your Life Depends On It.’ The Apollo is also a kind of organic gathering place for people at historic moments in African-American culture, as when thousands of people flocked to the Theater when Michael Jackson and James Brown passed away. Apollo Uptown Hall is a natural extension of the role we have always played, and creates a platform for us to more regularly engage the community in conversations that matter.â€