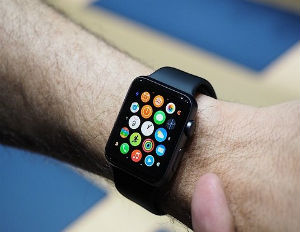 Techies the world over are rejoicing as the Apple Watch began making its way to the die-hard core of Apple’s fan base.

According to USA Today, the watch will not be available in Apple stores, a very different approach from past device releases in which devotees would line up for hours, sometimes even days, just to get their hands on the tech giant’s latest new gadget.

But more than 2 million people preordered Apple Watches that were going to be the hottest piece of mail feigning fans were awaiting on Fri., April 24, according to Forbes. The article also notes that analysts expect sales of the device to fall anywhere from 9 million to 30 million within the first year.

And to further hype the release (or tease those who didn’t preorder), Apple has begun airing three different minute-long commercials promoting the features of the new watch, according to Boy Genius Report.

But in some areas–such as London, according to The Verge, and Los Angeles, as reported by Gizmodo, among other international hot spots with a large number of luxury buyers and taste makers, according to USA Today– the Apple Watch is already available and–despite the massive amount of pre-orders–store purchases have yet to be a problem.

The watch has been polarizing since it was revealed earlier this year. The Verge debuted a video showing the many quirks of the device, and some reviews have been mixed about the experience of using the Apple Watch, such as this one from TechCrunch. Even we at Black Enterprise have debated whether or not to make the purchase of the device, which retail for prices starting at $349 and can go as high $17,000.

There’s also the elephant in the room of competitor Android Wear, which debuted a new system that allows wearers of its watches to leave their phones at home, a perk not yet enjoyed by Apple’s faithful.

But that’s done little to slow the growing App Store of games, tools and other utilities, which has reached above 3,000 offerings, according to CNET.