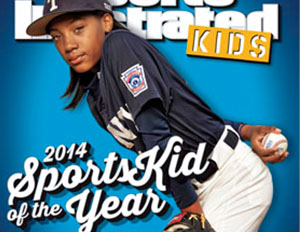 Disrespect in sports takes on a totally new form when it’s against a child athlete. Perhaps this will raise attention to the fact that respect must be restored to the game at all levels, whether it is little league, college or professional.

Over the weekend, a sophomore baseball player at the small college of Bloomsburg University in rural Pennsylvania, decided to arbitrarily throw out a sexually offensive tweet about a 13 year-old Â child-athlete who has been making headlines for her stellar achievements in and outside of sports.

News started to circulate that Disney Channel is going to make a movie about Mo’Ne Davis’, the girl who pitched in the Little League World Series and took her team to the international semi-finals. And for some reason, Joey Caselberry, the second-leading hitter for Bloomsburg University tweets:

“Disney is making a movie about Mo’ne Davis? WHAT A JOKE. That s— got rocked by Nevada”

In Sport Matters: Leadership, Power and the Quest for Respect in Sports, author Kenneth L. Shropshire states that respect is the most complex idea of all that he explores and that respect is the next step beyond tolerance in a continuum. “Respect places an affirmative obligation to act positively, far beyond, a ‘tolerance’ to allow someone else to exist,â€ states Shropshire.

We take matter very seriously; addressed the issue with the student-athlete (who has been dismissed from team), coach, and the team.

Bloomsburg Univ is deeply saddened by what was written about #MoneDavis by one of our student-athletes. His words do not represent us.

According to TMZ on Monday, Davis sent an email to the president at Bloomsburg University and asked him to reinstate the player. TMZ reports that “The team said Casselberry violated the athletic department’s social media policy — and possibly the school’s code of conduct.â€ TMZ goes on to report that “the school will NOT reinstate the baseball player … saying, “Right now we’re standing firm.”

Philly.com reports that before Casselberry deactivated his Twitter account, he posted an apology: “An example that one stupid tweet can ruin someone’s life and I couldn’t be more sorry about my actions last night. I please ask you to.”

“Forgive me and truly understand that I am in no way shape or form a sexist and I am a huge fan of Mo’ne. She was quite an inspiration.”