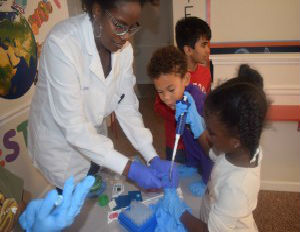 Are you looking for a school in the Atlanta area for your gifted child? Look no further. Atlanta Gifted Academy in Marietta is getting rave reviews from both parents and students.

Founded by Claire Anderson in 2012, the preschool—eighth grade academy uses gifted curricula from top universities such asÂ Stanford,Â andÂ students must have an IQ of 130 or higher to be admitted. The project-based learning school has a racially diverse student body and teaching staff, and at $12,000 a year, is surprisingly affordable.

BE Smart sat down with Anderson and parent Evita Wells to find out more.

Why did you start Atlanta Gifted Academy?

After I had my first son, I realized right away that he was bright. At 6 months he was recognizing words, at 11 months he was reading, and at 18 months he could identify countries on a map.

A week after he turned 2, I called the local university and had him tested. He scored in the 99.9 percentile on the Stanford-Binet.

The university told me my only option was to stop teaching him and he would average out. One university professor was shocked that Caleb was African American exhibiting such great skills. To have someone in the field saying that, I knew something had to be done. I told my husband I wanted to open a school for the gifted.

Each student at the school has a PLP–personalized learning plan. That’s important for gifted kids, who are often asynchronous learners. For example, I have one 7-year-old student who does sixth-grade math but third-grade reading. We tailor the education around the child.

How did you develop Atlanta Gifted Academy?

Anderson: AGA is developed along the lines of other, established gifted schools. We are also using gifted curricula from top universities. Each of our teachers specializes in the subjects they teach.

Wells: When a child is enrolled here, they’re given the IOWA test. The results go into the PLP, the nine-week plan for each child. The beauty of the school is its flexibility–if four weeks later the child has mastered the material, they adjust the plan so the child does not get bored.

What are other unique aspects of AGA? Â

Anderson: The students get Latin for language arts, and daily Spanish and Mandarin.

We also offer a three-week summer day camp that is open to all students–gifted or not. The camp offers everything that we offer throughout the year.

I’ve noticed a change in my son–in a different environment, such as church or Jack and Jill, he isn’t shy–he raises his hand to speak publicly. Before AGA, that was a problem for him.

For more about Atlanta Gifted Academy, visit its website.