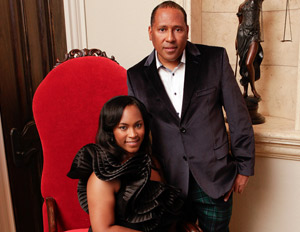 When Tanya Rodriguez was in high school, a European trip with her mother and aunt impressed her so much she says she vowed to “give another child the same opportunity.â€ Now, she and her husband, Atlanta radio personality Frank Rodriguez, known by listeners as Frank Ski, are making good on that promise–and more. Italy, the Amazon rainforest, and the Galapagos Islands are just a few of the global destinations the Skis take kids through their altruistic labor of love, the Frank Ski Kids Foundation. On Monday, May 23rd, in Atlanta, Frank and his wife will receive the Black Enterprise Community Champion Award at our 2011 Entrepreneurs Conference.

Throughout his more than 25-year career in radio, the philanthropic-minded Ski would find himself rubbing elbows with key influencers in entertainment and media. The 47-year-old aggressively sought to put those connections to work. “I wondered if I could encourage more celebrities to give back if they knew I would put the money where it needed to go,â€ he recalls. The answer was a resounding ‘yes,’ so the couple took to raising hundreds of thousands of dollars to expose hundreds of thousands of juveniles to science, technology, athletics, and the arts.

Each trip is preceded by a contest that allows interested children to showcase their skills in their areas of interest. The contestants are narrowed down to a filed of 20 and judged by national and local experts and celebrities. Ten winners are then selected to travel with the foundation. And everyone wins. The remaining 10 contestants are able to engage with local professionals in their area of interest.

The biggest fundraiser is an annual Celebrity Wine Tasting and Auction hosted at the couple’s Atlanta-area home. The event brings together celebrities and notables from all walks of life. “One of my favorite memories was seeing Bernice King [daughter of the late Reverend Dr. Martin Luther King] have a conversation with hip-hop rapper Young Jeezy,â€ Frank recalls. “We’ve risen over $200,000 for the Foundation at this year’s event.â€ Local businesses and national companies such as State Farm and Ford Motor Co. have also sponsored activities, with some business leaders even coming onboard as mentors to the kids, adds the foundation’s founder and chairman. Tanya works at the foundation full time as president. Married for 16 years, the two have spearheaded the organization’s efforts since its launch in 2000.

Through the Foundation, the Rodriguezes–who have four children of their own–work to expose kids to new places and experiences. Science and technology-related activities have included a six-day Space Camp trip at the U.S. Space & Rocket Center in Huntsville, Alabama, as well as a trip to explore the ecological wonders of the Amazon. Students interested in art have learned about potential careers from Atlanta-area advertising firms and spent a week studying masterpieces like Michelangelo’s Renaissance sculpture David in Florence, Italy. The Foundation’s premier sporting event is the Annual Youth Bowl, in which student athletes compete in football while learning leadership and teambuilding skills. The Youth Bowl is comprised of two exhibition teams in addition to six competitive teams and cheerleading squads. Each team has approximately 20 members. The cheerleading squads have approximately 10 to 15 members.

Giving kids their first glimpse of a foreign country or showing them what it takes to be an astronaut is a short-term goal that can have long-term results. “If your parents were lawyers or even your parents’ friends were lawyers, chances are you could see yourself doing it because you’ve been exposed to that all your life,â€ says Frank, who notes most young people may not have professional examples like these. “When it comes to science and technology jobs, we want the kids to say ‘This is something I can do.’ And we’re now seeing a lot of our kids getting accepted into colleges and picking professions related to whatever they did on our trips.â€

Program participants are also groomed to be comfortable interacting with sponsors and others who hold the key to future opportunities. For example, after a sojourn to the Charles Darwin Research Station in the Galapagos Islands in 2007, the Environmental Protection Agency invited participants to speak on environmental issues. The two students with the highest scores were chosen to represent the foundation and speak in front of the EPA about their experiences in the Galapagos Islands.

Many of the relationships the couple built with the kids transcend the foundation’s programs. When a participant in the Youth Bowl needed surgery for a heart ailment, “His mother waited outside the radio station for me because they’d found a hospital that would do the surgery across the country but they didn’t have the money,â€ says Frank, who immediately sprung into action to help fundraise. Other success stories include that of a student who has been commissioned to sell his own artwork after going on the art trip to Florence and selling pieces at the annual wine tasting program; and news that past program participants are being accepted to colleges, some on full academic and athletic scholarships, Frank adds.

Looking back, that initial promise the now 44-year-old Tanya made to herself after her first trip abroad has sprung into so much more. “It is very rewarding,â€ says Tanya about how the foundation has been a true benefit to her and Frank just as much as it has been for its young participants. “We feel like the proud parents of countless kids.â€

Are you in Atlanta? Join us and Frank Ski at the Black Enterprise Entrepreneurs Conference May 22-25. You’ll network with power players, entrepreneurs and more. As a bonues, if you enter the code EC11ATL when on blackenterprise.com/ec, we’ll give you a SPECIAL DISCOUNT for just $245. See you there!