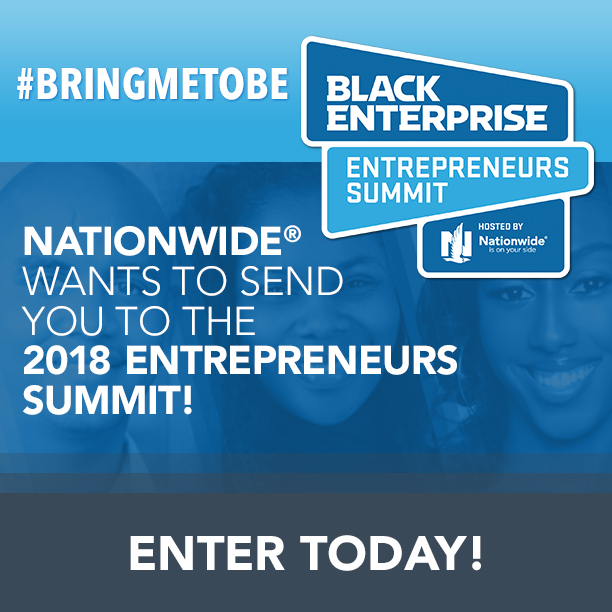 Nationwide is sending current or aspirational entrepreneurs to the 2018 Black Enterprise Entrepreneurs Summit! Enter the contest using the hashtag: #BRINGMETOBE and read the rules of the contest below:

NO PURCHASE IS NECESSARY TO ENTER OR WIN.  MAKING A PURCHASE WILL NOT INCREASE THE ODDS OF WINNING.

The Promotion is open to legal residents of the fifty United States and the District of Columbia, except where prohibited, who: (a) are 18 years of age or have reached the age of majority in their jurisdiction of residence at the time of entry, whichever is greater, and (b) are legally able to work in the United States. No purchase is necessary.

Employees and agents of Black Enterprise, its affiliates, subsidiaries, advertising and promotion agencies, and any entity involved in the development, production, implementation, administration or fulfillment of the Promotion (all of the foregoing, collectively referred to as “Promotion Entities”) and their immediate family members and/or those living in the same household of such persons, whether related or not, are not eligible to enter the Promotion.

Nationwide Mutual Insurance Company (“Nationwide”) is not the administrator of the Promotion.

The Promotion is in no way sponsored, endorsed or administered by, or associated with, Twitter or Instagram.

To enter, post a photo of your business, along with a caption explaining why they deserve to attend the Entrepreneurs Summit. Users must include the hashtag #BringMeToBE, and also tag Nationwide and Black Enterprise in their caption to your personal Twitter or Instagram account. Private Twitter or Instagram handles are ineligible. All entries in the Prize drawing have an equal chance of winning. Odds of winning a prize depend on the number of eligible entries received during the Promotion Period.

Limit (1) entry in the Prize drawing, per person during the Promotion Period. Multiple entries will not be accepted. Anyone found to use multiple Twitter or Instagram accounts to enter Promotions will be ineligible.

Entry constitutes consent to participate in Promotions and for Black Enterprise to obtain, use, and transfer the entrant’s name, address, Twitter or Instagram handle and other details for Promotion administration purposes.  Black Enterprise will not be responsible for lost, incomplete, illegible, late, misdirected, stolen, or mutilated entries; technical or mechanical malfunctions; errors in the Official Rules, in any related ads or materials; or processing error. Black Enterprise can void the entry of any entrant who it believes has attempted to tamper with or impair Promotion administration, security, fairness, or proper play.

Winner of the Prize will be selected in a random drawing on June 1, 2018, from all eligible Prize drawing entries received. Winners will be notified via phone and email. If a Prize winner is not eligible to win, or if Black Enterprise is unable to contact the winner after a reasonable effort, the prize will be forfeited and an alternate winner may be selected. Odds of winning depend on number of eligible entries received.

Prize winners are responsible for any expenses incurred in connection with the prizes. No substitution or transfer of prizes is permitted, except that the Promotion Entities reserve the right to substitute a prize of equal or greater value, in the event that an offered prize is unavailable. All federal, state and local taxes on prizes are the sole responsibility of the winner. Prize details not set forth herein are the sole discretion of the Promotion Entities.

If requested, winners must execute and return an Affidavit of Eligibility, Liability Release and (where legal) Publicity Release within three days of notification. Failure to do so may result in disqualification, forfeiture, or award to alternate winner.

By receipt of any prize, winner agrees to release and hold harmless Black Enterprise, Nationwide, Twitter, Instagram and their respective subsidiaries, affiliates, suppliers, distributors, advertising/promotion agencies, and prize suppliers, and each of their respective parent companies and each such company’s shareholders, officers, directors, employees, members, assigns and agents (collectively, the “Released Parties”) from and against any claim or cause of action, including, but not limited to, personal injury, death, or damage to or loss of property, arising out of participation in the Promotion or receipt or use or misuse of any prize.

Promotions are governed by and subject to the laws of the United States and the state of North Carolina.

All federal, state and local laws and regulations apply. Void where prohibited by law. Prize Winner may receive an IRS 1099 form for the value of their prizes. By participating in a Promotion and/or accepting any prize, entrants grant the Promotion Entities permission to use their name, likenesses, image and Twitter or Instagram handle in connection with the Promotion for purposes of advertising, publicity and promotion purposes, without further compensation to the entrant, unless prohibited by law. Entrants agree to be bound by the Official Rules and the decisions of the judges, which are final and binding on all matters relating to Promotions. The Promotion Entities are not responsible for any typographical or other errors in the printing of the offer, administration of Promotions or the announcement of the prizes, or for lost, late, misdirected, damaged, incomplete or illegal entries.

The Promotion Entities reserve the right at their sole discretion to disqualify any entrant found to be (a) tampering or attempting to tamper with the entry process or (b) violating the Official Rules.

Except where prohibited, as a condition of participating in Promotions, entrant agrees that any and all disputes that cannot be resolved between the parties, and all claims and causes of action arising out of or connected with the Promotion or any prize awarded, or the determination of winner shall be resolved individually, without resort to any form of class action. Further, in any such dispute, under no circumstances will entrant be permitted to obtain awards for, and hereby waives all rights to claim punitive, incidental or consequential damages, or any other damages, including attorneys’ fees, and entrant further waives all rights to have damages multiplied or increased.

All issues and questions, rights and obligations of entrant in connection with Promotions shall be governed by, and construed in accordance with, the laws of North Carolina, without giving effect to the conflict of laws and rules thereof.