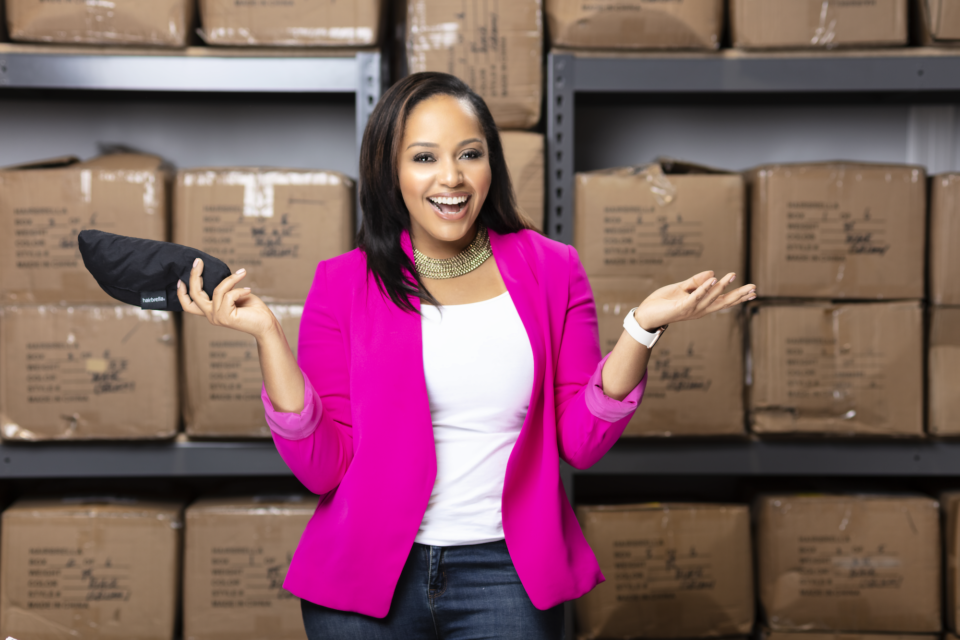 Tracey Pickett is the inventor of Hairbrella. Her "reinvented" rain hat offers protection from inclement weather for a variety of ages. Newer products include an unisex docker hat. Courtesy photo- Hairbrella

There’s a pressing problem that persists with many Black women when it comes to their hair; many wrestle with figuring out how to keep their freshly styled kinks and coils or a fresh press from falling and getting frizzled when faced with rain drizzle.

It’s an issue that has taken flight recently when award-winning actress Mo’Nique took up the cause to chastise and ridicule Black women for wearing bonnets in public at airports, malls, etc. Likely those women were trying to keep their do’s laid while trying to get to their final destination.

Former attorney Tracey Pickett coped with that same hair dilemma, and wearing a bonnet or tying a plastic bag on her head to protect her tresses wasn’t quite the solution she was looking for. So Pinkett came up with a creative solution to look cute and keep her hair perfectly coiffed under a cap with the invention of Hairbrella, “The Rain Hat Reinvented,” which fights against hairdos being destroyed by rain, pool splashes, snow, downpours, and other inclement weather.

Pinkett’s journey to becoming the founder & CEO of Hairbrella is rooted within her own struggle of getting caught in rainy weather in Atlanta each time she headed to a salon for a hair appointment, according to her website. Pickett also told Good Morning America’s hosts that her hair had also been “ruined on the way to an on-campus interview” while attending law school.

“So I looked online for a solution. There was none, and knowing that it’s really important for women to look and feel their best…, I decided it was time to reinvent the rainhat, and the Hairbrella was born,” Pickett said.

Pickett told BLACK ENTERPRISE that she was attending the University of Georgia School of Law when she initially tested a shower cap and beanie combination for Hairbrella.

She later developed her patented idea on nights and weekends while she worked as a lawyer. The entrepreneur was initially employed in the corporate and IP law field, but Pickett now works in her business exclusively. Pickett launched Hairbrella in 2016 with a Kickstarter campaign. Her brand has grown exponentially since that time.

“Collab invested $500K in May 2020 to fuel growth (“The company” grew 700% last year). To get started, I invested $65K of my own money into development between 2014-2017 before taking on angel investors in November 2017. Nathaniel Bronner (Bronner Bros) and Jewel Burks (before forming Collab) were two of my first angel investors,” Pickett told BLACK ENTERPRISE.

A post shared by The Rain Hat Reinvented. (@hairbrella)

The HB Elements Unisex Docker Hat, which is waterproof and satin-lined, is another item of note. Also, a Hairbrella Pro XL offers an adjustable face shield that is detachable. This item may be most helpful to individuals who work in healthcare and want extra protection against COVID-19 during the pandemic or letter carriers who often work in unpredictable elements.