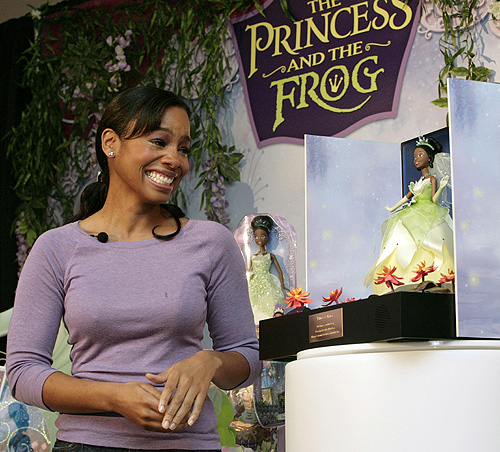 From a self-proclaimed dreamer to a world-renowned Dreamgirl, actress and singer Anika Noni Rose has seen many of her dreams come true.

In 2008, the Tony-award winning actress co-starred with James Earl Jones and Phylicia Rashad in the all-black stage production of Cat on a Hot Tin Roof, directed by Debbie Allen. Perhaps best known for playing opposite BeyoncÃ© Knowles and Jennifer Hudson in Dreamgirls, Rose also co-starred on the HBO series The No. 1 Ladies’ Detective Agency.

Now, as the voice of Tiana in the animated movie The Princess and the Frog, Rose has become Disney’s first black princess. The movie, which premiered in December, has been widely received and is sure to keep her star hung high for years to come. The doll is a finalist for the Property of the Year Award at this month’s American International Toy Fair in New York City. Rose, 37, spoke with Black Enterprise about the portrayal of African Americans in the movie, its impact on young black girls, and the importance of parents believing in their children’s dreams.

What affirmative image will Princess Tiana provide for African American girls?
This movie is opening up a world to these children with their curly hair, round noses, full lips, and brown skin to think of themselves as something beautiful and worthy of being held aloft. When it’s time to play princess, [little black girls] don’t have to whip out a yellow towel and pin it on their hair. I think when you see yourself in one position consistently, it shapes your mind to think that that’s where you have to be but I want them to know that they are special too and worthy of being showered in fairy dust.

How do you think the doll will resonate with other races?
After I sang the national anthem at a NASCAR event, I noticed one of the drivers’ daughters was there and she was tired and cranky. I gave her a Princess Tiana doll and some slippers. To see this little blonde-haired girl grip that doll–she was so thrilled about it. She doesn’t care what color that doll is. She’s in love with the vision of this princess.

How receptive was Disney to your input?
We had long conversations about what we wanted Princess Tiana to look like. I didn’t want her to be a cookie cutter [image]. I wanted her to be distinctly who she is. I thought it was important that she not be a wisp of a girl; that she looked like a real chef who eats the food she makes. Making her left-handed was also very important for me. Any child who’s left-handed and grows up with nobody