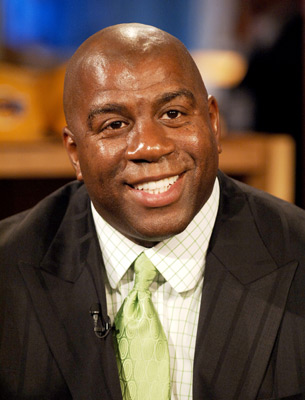 Earvin â€œMagicâ€ Johnson's Aspire is scheduled to launch by the summer 2012 (Image: File)

It’s been 14 years since Earvin “Magicâ€ Johnson has donned his No. 32 purple and gold uniform and thrown that signature no-look pass in a game, but his competitive nature wouldn’t let him stop working. The retired NBA all-star has crossed over into a new league and has gone from being known as a contender on the court to a champion in American business. As chairman and chief executive officer of Magic Johnson Enterprises, Johnson has AMC Magic Johnson Theaters in four cities, a string of Burger King and T.G.I. Friday’s restaurants, more than a dozen 24 Hour Fitness Magic Johnson health clubs, and 116 Starbucks in 14 states. His strategic partnerships and investments have allowed him to provide jobs, goods, and services to minority neighborhoods where economic development was often neglected. His company motto is: “We are the communities we serve.â€

Black Enterprise caught up with the 50-year-old NBA Hall of Famer moments before he received an Entrepreneurial Leadership award from the Council of Urban Professionals for his work to advance minority business.

Why aren’t there more Magic Johnsons–more professional athletes who have been able to make the successful transition from sports into business?
A lot of these young men and women, not just in sports but in entertainment as well, forget that one day they’re not going to be on top. Just look at what happened to Antoine Walker, Allen Iverson; I could go on and on. It’s a shame that a guy like Antoine can make $110 million and now he’s broke. But we continue to have these types of stories because we don’t reinvest in our communities or invest our money to build real wealth.

What needs to happen?
Our mindset needs to change when we think about material things. We want to be hip and cool; we want to have 20 cars. Young people look up to people like Kobe Bryant or LeBron James, but their role models should be people like Ken Chenault. They don’t realize he’s much more powerful and will make more money than them for years because he won’t have to retire early like pro athletes do. If we were to invest and own businesses we would be able to build wealth and pass it on to our children. That’s where black America, including black entertainers and athletes, is failing because we haven’t been able to build wealth and pass it on.

To a young person just starting out, what’s the most important thing they should always keep in mind?
Have you done all your homework? A lot of times you think it’s a good business venture, but once you’ve done your research you’ll find out that it’s not, it’s just something you wanted to do but there’s no business there. What you want is to be able to address a demand. A lot of people build something and hope they come. I don’t. I build something because they already demand it and that’s why I’ve been successful.

What are some things to research when doing your homework?
Ask yourself why customers are going to come into your business. How many people are there in a three- to five-mile radius? How much per household is everybody making? Where is your nearest competitor? You have to know all of these things to know if you have a chance to be successful. When I built my Starbucks there were no coffeehouses in our community. So I knew we had a really good chance of being successful. We [African Americans] are the No. 1 group of people who go to the movies, so building Magic Johnson theaters was a natural thing. You have to recognize the need.

You’re known for forming great partnerships. Why is that so important?
I want to be the best at everything I do, but I had to take my ego out of it enough to say, “Hey, I don’t know business so I have to make sure that I go out and build an incredible team.â€ I’ve been blessed to have excellent partners, and everybody has done their job and more. I tell my people at Magic Johnson Enterprises that we have to over deliver and that’s what we’ve been doing–not just to our partners but also to the community and to minority professionals across the country.