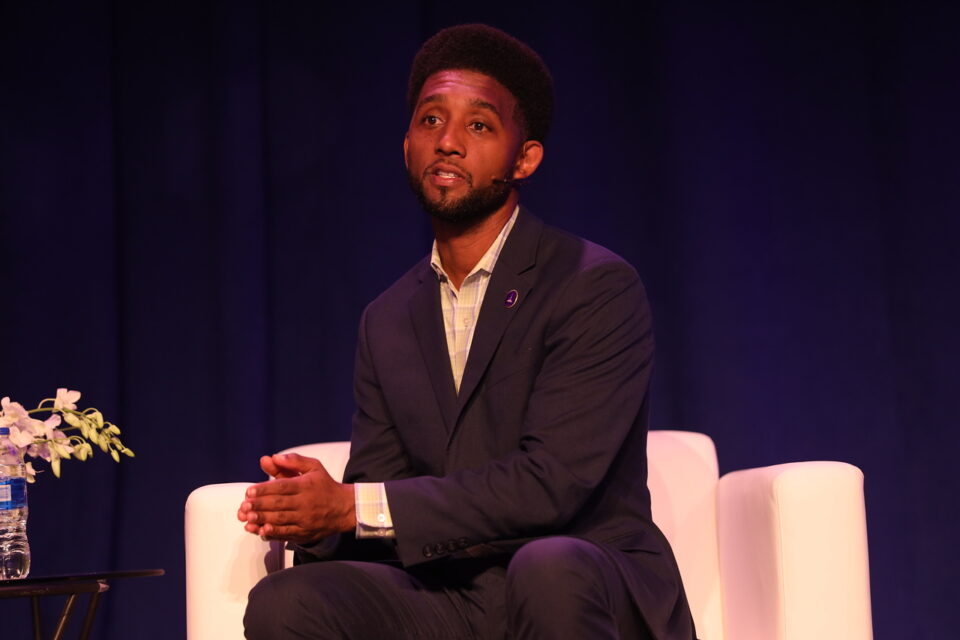 The 52nd Mayor of Baltimore Brandon M. Scott graced a fireside chat at BLACK ENTERPRISE‘s Black Men Xcel Summit to talk about the opportunities and challenges of walking in his calling, in addition to serving his city on the frontlines of a pandemic fallout, crime and law enforcement, and housing.

The session, moderated by PBS NewsHour chief Washington correspondent and weekend anchor Geoff Bennett, provided a platform for the 38-year-old city leader to further affirm his role as the voice of the under deserved and the forgotten, including Black men.

“I can be for them, what I didn’t have,” Mayor Scott proclaimed.

“There was only one elected official I had in my life that I could see, that I could touch, that would come to my school, that I would see walking down the street and that was Congressman Elijah Cummings and I tried to emulate that but take that to the next level. By being there and showing up for our young people in ways that they have never seen before. And that is what keeps me going.”

“Wes understand what Baltimore needs,” Scott said. ‘We can hold people accountable when we’re dealing with this flow of illegal guns and things into our city and our state but we also can build and invest in better people and communities at the same time and we don’t have to turn back the clock to breathing while Black policies is going to be transformative for our city and out state.”

Inner city violence and concerns about policing are just many of the problems Baltimoreans face, but as the acting authority over the police department, Scott has had to find that balance to maintain a positive relationship between both residents and officers. He has had to implement a comprehensive approach to dealing with the issues by utilizing other resources like victim services.

“My police department this year with 500 less officers that they’ve had in 2014 and 2015 seized more guns and made more guns arrests of people with violent guns… than they did when we had more cops because we’re not making them the end be all,” Mayor Scott explained.

In these efforts, Mayor Scott credits his team for helping him navigate through priorities as the official head of the city.

In addition to the late Congressman Cummings, Scott also praised former Mayor Stephanie C. Rawlings-Blake as someone that he looked up to. He recalled his start into city government as a staffer thanks to her support.

“She allowed me as a young staffer to have so much autonomy and really authority at 23, 24, 25 years old. It allows me now to do my job in ways that I would never be able to,” Scott explained.

For those young brothers who are interested in running for office, Mayor Scott urged to stay active in the community and find experience in city government.