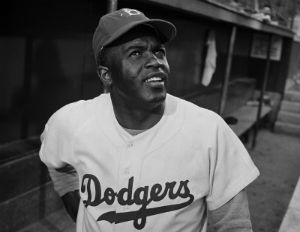 “He’s the most important person in baseball.â€

Tonight, Jackie Robinson, the two-part documentary by Ken Burns, Sarah Burns, and David McMahon (in partnership with Bank of America) premieres on PBS. The film depicts the life and accomplishments of civil rights champion and baseball legend Jack Roosevelt Robinson. “He may not be the best player, but he’s the most important,” Burns recently said in an interview for CBS’ Face the Nation. “Because he was this pioneer, finally making the game what it had always claimed to be, the national pastime, by being the first African American in the modern age to cross the color line.”

The film represents the eighth collaboration in a long-standing partnership between Burns and Bank of America that aims to convene stakeholders around shared cultural experiences, inspiring meaningful dialogue on social issues and honoring those who have altered the course of history.

“Ken Burns has captured the spirit and legacy of Jackie and Rachel in this film, who were trailblazers and equal partners in the fight for social justice,â€ said Andrew Plepler, environmental, social and governance executive, Bank of America. “Our partnership with Ken Burns and investment in Jackie Robinson is part of our steadfast commitment to fostering an inclusive culture and honoring those who have altered the course of history.â€

The documentary premieres during a significant moment in American history, and offers another opportunity for discussion around ongoing social justice issues —both the struggles and triumphs of the last 50-plus years. The film also highlights the courageous journey of his wife, Rachel Robinson, who fought alongside Jackie, to bring attention to women’s efforts to drive social change.

“I’ve worked with the bank for many, many years, and I’m appreciative of not only their financial support to bring my films to life, but also their commitment to partnership and desire to create a collaborative environment to develop meaningful solutions for social change,â€ said Burns.