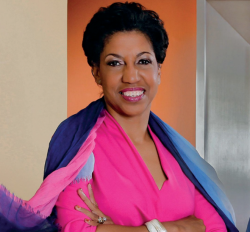 Interviewing Teri Williams was right up there with meeting First Lady Michelle Obama for me–I had goosebumps the entire time. I find it deeply empowering to meet a woman who owns a bank–yes, a bank!

Teri Williams is the president and owner of the largest, black-owned bank in America, One United. She’s a graduate of Harvard Business School, a mother of two, and has been married for 25 years. OneUnitedÂ has more than $620 million in assets under management, and this summer, launched a social media campaign that caught the attention of a host of A-list celebs.

WhileÂ OneUnited Bank has over $620 million in assets under management, ranking in the No. 2 spot on the BE 100s Banks List, this conversation is less about how to make more money, and more about how to increase your money mentality. During my time with Williams, I learned fiveÂ ways to increase my wealth mentality:

Williams shared that she is a type-A personality, yet she has found that her greatest opportunities have come as a result of her “remaining open to possibility.â€

It was never on Teri William’s vision board to buy a bank.”My only goal was to provide economic empowerment to African Americans. I did not know how I was going to accomplish such a life-sized goal,â€ she shares.

When her husband initially proposed buying a bank, she thought it was a long shot. Well, the long shot led the power pair purchasing three smaller banks and merging them to form a national umbrella now known as OneUnited. The name was chosen to reflect the vision of the unifying the banks and the black community.

Williams says that part of her process is not really having one. “For me, it is all about recognizing that you don’t know, what you don’t know. In fact, if I have this process so laid out, it would close me off to people reaching out and educating me about ways to do things better,â€ she says.

Similarly, Williams had the same approach when she enrolled at Brown University, “I had no idea what an Ivy League university was. I attended Brown University as a recommendation from a friend of the family, and simply because they offered me the most money. Yet, it was at Brown University where my peers endeavoring to become judges, international attorneys, and doctors inspired me. This is what began to challenge my initial career interest of becoming a teacher. After hearing all of their ambition, I decided that studying economics would be more fitting.”

2. Your Teachers Are Everywhere

Williams says that while she embraced being at the top of her class at Harvard Business School, having a MBA, and working in corporate America, she credits her business acumen to her great grandmother Annie Coachman–affectionately known as “Ma-honey.â€

Ma-Honey had a real estate portfolio: a juke joint, a candy store, and a BBQ pit in the 1950’s. “As an adolescent, I followed Ma-honey around, watching how she interacted with people with grace and confidence, with those from within the community and those traveling from the other side of the railroad tracks, â€ Williams says. “We are never to forget where we come from. Always remember that you are someone’s child, someone’s grandchild, and someone’s great grandchild, and those relationships can serve as the foundation to your success.â€

I have heard my fair share of rags-to-riches tales, but Williams’ story was, nonetheless, money motivating. The wind of possibility filled the room, as she discussed her humble beginnings in Indiantown, FL, where the median income, to date, is $28,000 with a population of 6,850 (U.S. Census 2010).

Yet, Teri Williams is now the president and owner of the largest black-owned bank in America, with $620 million in assets under management across bank locations in Miami, Boston, and Los Angeles. She credits her success to a disciplined prayer life for guidance and the strength to carryout that guidance, once it is given.

While Williams was the first of her family to graduate from college, her parents played a large role in feeding her curiosity. One family tradition that encouraged Williams was her family’s Sunday drives. In spite of limited financial resources, Williams’ parents thought it important to see the other side of town.

During these drives, Williams says she began to look through the windows of the homes and wonder, “Who lived in these homes, how did they get here, what did they do to live like this, why do these people have so much, and why don’t we live like this, and what drives them?â€

A seed was planted. Williams says that she has since been driven by curiosity to understand why some people were wealthy, why others were not, and what drove them in either direction.These drives not only gifted Williams with curiosity, but also provided her with a sense of reassurance, “If they can do it, I can do it, too.â€

Â 5. Your Goal Will Grow With You

“My goal to empower African Americans economically–this is a growing goal. It is a goal that I am committed to from now until to the grave,â€ Williams says.

In August, the #BankBlack challenge, issued by Atlanta-based rapper Killer Mike, prompted black America to move $10 million into the bank in less than one month. During that time, OneUnited went from opening less than 50 accounts daily, to over 1,000 per day.

The campaign was designed to empower the community by recycling black dollars and show solidarity with the #BlackLivesMatter movement. The #BankBlack initiative also prompted celebrities like Solange Knowles, Alicia Keys, BeyoncÃ©, and Queen Latifah to utilize their influence by encouraging more celebrities to #BankBlack.

“You cannot know everything starting out. But, if you keep going and listen for the guidance, you will find it wherever you are,â€ Williams says.

To learn more about OneUnited or to take the #BankBlack Challenge, visit www.oneunited.com.

Shani Curry -St.Vil, is the Host Of Purse Empowerment TV Â where she provides Â tips on boosting your credit score, increasing your savings, eliminating student loan debt, becoming a home first time homebuyer Â and even on how toÂ use your first home to start your real estate investment portfolio.

Shani, is the Author of 10 Things Every Woman Should Keep in Purse, where sh shares her journey of letting go of her own ” Princess Gimmies” to increase Â her credit score, become a home owner, and share her passion with other women who value there purses but never more than the wealth inside of it!

Every time I come in contact with someone I want to remind them of just how Power-full they truly are. Literal, #Purse Empowerment! I do this by empowering mostly women (some men) tackle their financial frustrations rather its saving their 1st $10,000, eliminating thousands of dollars in credit card debt, accelerating the process of paying off their student loan debt, boosting their credit scores, purchasing their first homes, converting their 1st homes into investments and even creating a business that will produce even more wealth for them to save, spend, share and invest. I am really good at this because I was a Journalism major (Yes, I went to school to be a news reporter) turned Banker, turned Car Saleswoman ( I sold Luxury cars for a year), turned Insurance Agent ( I am Licensed to sale Life, Health& Variable Annuities ( 7 years) and I purchased my 1st investment property at the age of 22 and then lost my job! I share all of this with you because when you join the Purse Empowerment community you gain access to my inner News Reporter that is super charismatic, and super noisy about all things financial. There is nothing like a news reporter who enjoys picking apart everything about everything to make sure that you are getting the most accurate information when it comes to Personal Finance. I mentioned my licenses and the products that I have sold because when you sale a product you are forced to learn the Pros & Cons of it to keep your licensed, remain in compliance and to be on par or above your competitors! I learned to boost my own Credit Score, because when I purchased my 1st property I had to wait 2 years before I could actually purchase My credit score was so low, you could have mistaken if for my weight. I improved it within 2 years from a 520 to a 650! I learned to purchase property because the 1st property that I ever purchased was negotiated by me; I was able to convince the seller to throw in all sorts of bells and whistles when it came to property improvements and renovations along with down payment assistance. I know what a lender is looking for when it comes to issuing Car Loans, Business Loans, and unsecured loans because for 3 years I was a banker and it was my job to approve and/ or and decline loans. I know how to save money because while partnering with my husband we decided to rent out my 1st property, move in with my in-laws, skip out on a $20,000 wedding and have since become property owners 3 times over all before the age of 35! Oh, and when it comes to purchasing a Car, I know how women are often duped by car salesman when it comes to purchasing a car because I was once colleagues with some of the smoothest talking car salesman you ever want to buy a car from. So, when it comes to redefining yourself as a girl who lost her 1st real job after purchasing her 1st property, being a wife of 6 years, the mother of two tots ages 3 and 5 (might I add boys), publishing her 1st book 10 Things Every Woman Should Keep In Her Purse while pregnant, launching a successful web series ( Purse Empowerment WebTV) with over 25,000 monthly viewers, and building a thriving business of 5 years where I partner with individuals, large organizations, and corporate sponsors to ensure that no woman defines herself by the status symbol of her Purse but by the wealth & wisdom contained inside of it! #PurseEmpowerment!