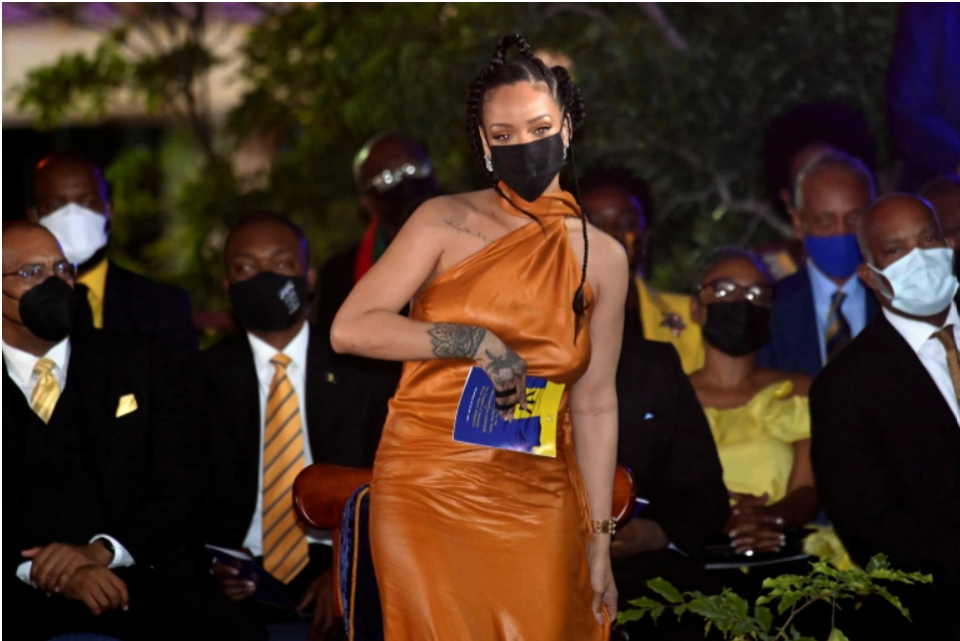 The new Republic of Barbados has officially broken away from British rule and has declared Rihanna as their national hero in the process.

On Monday, Barbados celebrated its historical political transition with a ceremony hosted in the capital Bridgetown where they named Rihanna the National Hero of Barbados. The night was a celebration of Barbados removing Queen Elizabeth II as its head of state and entering a new era as a republic, Al Jazeera reports.

Prime Minister Mia Mottley congratulated Rihanna with the honor of being hailed as “the right excellent” before a crowd that applauded the pop star’s success as a Barbados native.

“On behalf of a grateful nation, but an even prouder people, we therefore present to you the designee for national hero of Barbados, Ambassador Robyn Rihanna Fenty,” Mottley said.

“May you continue to shine like a diamond and bring honor to your nation by your words, by your actions, and to do credit wherever you shall go. God bless you, my dear.”

The Prime Minister made a subtle reference to Rihanna’s 2012 hit single “Diamonds”.

Mottley credited the decorated Grammy award-winning singer commanding “the imagination of the world through the pursuit of excellence with her creativity, her discipline, and above all else, her extraordinary commitment to the land of her birth”.

Rihanna was named Robyn Rihanna Fenty in Saint Michael, Barbados and was raised in Bridgetown. She moved to the United States as a teenager to pursue a career in music that eventually turned her into an international superstar.

Over the course of her nearly two-decade-long career, Rihanna has become one of the best-selling artists of all time winning prestigious awards, launching a successful fashion and beauty company that skyrocketed her net worth to billionaire status.

While accepting her honor on Monday night, Rihanna raised her palm to her heart and said thank you before walking offstage with Mottley and sharing a hug. Before taking her seat, Rihanna greeted several people, including Prince Charles, Yahoo News reports.