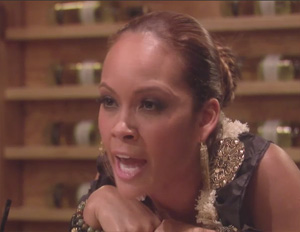 I have been a die-hard fan of reality TV since the early seasons of MTV’s The Real World. (Well, at least until they started doing those “challenges” and mixing casts.) But the latest escapades have me a little less likely to admit to that (publicly) anymore.

The latest bruhaha over the recent ratchet (love that word) activities of the ladies on VH1’s Basketball Wives, has me reconsidering. The series has been full of dramatic catfights from day one, starting with verbal battles between cast members—each lady seems to get a turn—and ending with water throwing and Twitter beefs.

We all know that a major theme— and obvious ratings draw — is the she-said-she-said drama, which has now escalated into the form of what people are calling adult bullying.

I have to be honest, I’d never really acknowledged the term for grown women who consistently belittle and threaten—and sometimes exercise— bodily harm on another adultÂ  until the latest recurring incidences of purse-hostage-holding antics, dinner table confrontations and Kentucky Derby throw downs. When the words “adult bully” were mentioned this morning, I initially raised a skeptical eyebrow.

All the talk, debate, discussion and finger-pointing about the prevalence of adult bullying on reality TV had me thinking about everyday incidences of bullying that happen not only in the home, but on the commute to work and in the workplace.

Though the hot topic centers around reality TV (which is never really reality), bullyingÂ  among adults is definitely a more common occurrence than people think. In an economic climate where many are walking around harboring issues that stem from underemployment, financial difficulties and piling bills, there can be a lingering fog of anger, resentment and bitterness that follows workers from the commute to the desk. Add to that issues such as undiagnosed personality disorders and insecurities stemming from childhood and adult traumas, and you have the perfect breeding environment for adult bullying.

That boss who uses disrespectful and demeaning language when addressing employees: BULLY.

That competitor who keeps badmouthing your company via social media: BULLY.

That sistergirl on the train who bumped you, didn’t say, ‘Excuse me,’ and had the nerve to look back like, ‘What you gonna do?’: BULLY

The dude on the basketball court who always wants to get into an altercation when he’s “fouled” (or the dude excessively fouling): BULLY

The coworker who keeps talking over you as you present an idea, who takes your ideas as their own, and who spreads unsavory office gossip about you: BULLY

That girl who, after a couple shots of Patron, is cussing out every girl who accidentally steps on her foot in a crowded club: BULLY

That friend/family member who consistently verbally (and sometimes physically) lashes out when you don’t agree with them on something they say or want to do: BULLY