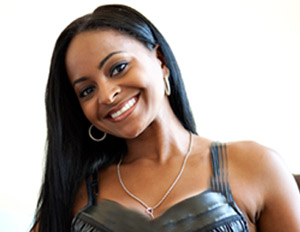 Originally known for being a Miami Heat dancer and mother to Orlando Magic center Dwight Howard‘s son, Royce Reed has carved out her own space as a media figure with her appearance on VH1’s popular Basketball Wives. While going the reality TV route has proven to be both a gift and curse, the Orlando-bred performer has evolved past public misperception. A graduate from Florida A&M University with a degree in theater, Reed recently returned to her acting roots, completing an off-Broadway run on the long-running play, Platanos & Collard Greens. She’s also used notoriety from Basketball Wives to publish her own book series, College Girls. The budding businesswoman also runs her own dance company, Fantashique, and manages a non-profit organization, Love to Dance. BlackEnterprise.com caught up with Reed, who explains her evolution as a career woman and brand. –Amber McKynzie

You recently completed a two-week run of the Off-Broadway show, Platanos & Collard Greens. How did you get connected with the show?

My publicist got the audition for me. I went in and auditioned, and they said they were pleasantly surprised. I think they kind of expected me not to do well. A lot of people don’t know that I was a theater major at FAMU. That’s something they don’t ever show on [Basketball Wives].

Who is your character in the play, and do you relate to her in any way?

Malady is very Afrocentric. She’s natural. She’s very strong-minded; strong-willed; very opinionated; very vocal. She also has a vulnerable side. She reminds me a lot of myself in certain ways, but [she’s] different in the way that I’m not just Black power all the time. I love my race, but I’m a little bit more giving than she is.

Because of the personality differences between you and Malady, was it ever a challenge to portray her character?

I wouldn’t say there were challenges because this is my career. I’m used to playing different characters. I pulled from people I knew that reminded me of her. So I try to pick up on little things and bring them into her character.

In addition to acting, you’re also a published author. How was the transition into publishing?

[My first book] series is College Girls–that’s out right now. It’s a series of three [books]. I finished writing the book not too long after I finished school. It was one big book, and I was trying to figure out a way to get it published. [Then] I got pregnant and had to concentrate on raising [my son]. So when [Basketball Wives] came around and my name just started being put out there, I realized I could self-publish. That’s when I split it up into three parts. It’s based off of my life and some friends of mine in college. It’ll make you laugh; it’ll make you cry; it’s very real. [The series] isn’t sugarcoated at all, and I think it touches on a lot of the issues we deal with in college that I’ve never seen a book really touch on.