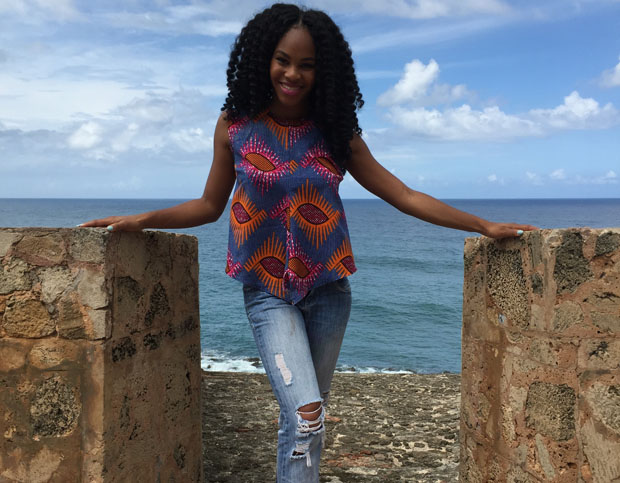 Amber spent a summer in London, England while an undergraduate at Howard University

Location and Duration: London, England, UK; Summer, about two and a half months

BlackEnterprise: Did you always want to study abroad, or is it something you decided to do after you started college?

Cuff: I actually never thought about it, but I love to travel and I’ve always wanted to go to London. When my professor suggested it, a light went off in my head. I just had to try it out!

How did you prepare to go abroad? Did your school help?
Once my advisor confirmed that my study abroad could be credited, it was pretty much up to me to handle the rest. I did lots of research on the neighbourhood that I would be staying in. I researched the transportation system to see how I would get to and from classes and how to change my phone over to the UK network.Â  I even learned that pick-pocketing was one of the most common crimes, so I found ways of comfortably securing valuables on my person, such as my money and iPhone, and I knew to leave my passport in a secure place at my flat.

Did you speak a language, other than your native tongue, while you were away?
English is the first language in London. However, during a week visiting Paris I definitely stumbled through French.

Who did you stay with?
I stayed in a flat (apartment) with eight other young ladies from Hong Kong, Japan, and the U.S.

What were you expecting before you actually got there?
Although it was a place I had dreamed about going for many years, I didn’t actually know what to expect.Â  I think I expected it to be gloomy and rainy and quite a conservative place, or maybe I watched Â Parent Trap to many times while growing up.Â  I didn’t know what to expect from my studies, I just knew that LCF was a prestigious school for fashion and I was ready to learn everything I could.

At what university did you study?
I studied at The London College of Fashion.

What was it like to attend classes?
It was interesting. The British have a lot of pride and they love being British, so it was very interesting to hear their take on the fashion industry and how business is done in the UK.Â  My classmates came from all over the world so it was also great to hear all of their perspectives as well.Â  My classes were not difficult, however, my professors only expected the best and they made that very clear.Â  I really loved it because it forced me to push even harder.Â  I don’t think I ever expected to pull so many all-nighters during my time studying abroad.

Did you establish any lasting relationships?
Actually, I did! One of the girls that I stayed with ended up being a long- distance cousin (which I believe to be more than a coincidence).  We are great friends and we are both starting our own businesses in fashion, so we have much in common.

What did you realize was your biggest misconception about the people and/or the country?
I realized that London is a wonderful city, even better than I thought it would be. It is a very diverse, metropolitan city that is always bustling; similar to the rate of New York City and, at times, can be overwhelming.  I learned that although the city is known for is ‘pomp and circumstance,’ it is also very urban, weaving traditional and modern concepts with everything from architecture, fashion, and ways of living. I believe that my initial expectations where not in-line with what the city truly had to offer.

Another misconception I had, was how aware the British were of American issues.  During my time in London, the Trayvon Martin verdict was announced.  I encountered many Londoners who were very worried and had been following the trial.  They were concerned about the state of black people in America and wondered if racism was really as bad as what they were hearing.  However, as an American, I was not nearly as versed on British news besides the birth of the royal baby at that time.

What were their biggest misconceptions about you and where you were from?
I believe I blended in most of the time until people heard my American accent.

What did the experience of studying abroad teach you?
It taught me the importance of traveling and getting outside of the world that you live in.  It really helps to expand your view and outlook.  Meeting people of many cultures, you become more open to trying different foods and experiences. I know that I learned a lot and grew as a person and as a fashion designer from my time in London.

Did you come away with any valuable personal lessons?
I definitely took my health and diet more seriously.  During my stay, there where frequent advertisements on television and billboards shunning food made with preservatives and harmful chemicals.  Many of these food items were sold in the States but were banned in the UK! More so, I began to love how Londoners would walk almost everywhere: to the grocery store, the movies, to work; even with their great public transit system.  I love how health and wellness was built into their lifestyle.

What’s your favorite memory of your experience?
My favorite memory would be renting a bike and riding around central London at night.  It was the last night of my trip and I wanted to soak up as much of the city as I could before departing.  We rode from my flat, through a pitch black Hyde Park.  From there we found Buckingham Palace, Big Ben, The London Eye. Our ride was very spontaneous, taking various bridges back and forth over The River Thames until our legs burned.Â It was an adventure; I had a blast.

Would you recommend studying abroad to others?
Absolutely! If it fits into your curriculum, I believe it is a great opportunity.