Before You Hit Send: Should You Use Emojis And Emoticons At Work? 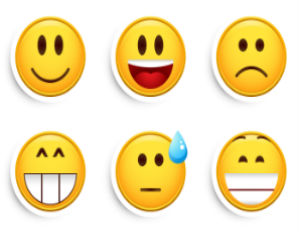 Considering the average American sends and receives about 32 textsÂ per day, according to Informate, it’s quite easy to fall into the trap of including the all too familiar smiley face emoticon in your emails at work. But the question is, when communicating with colleagues in the workplace, should workers hit “send” on that smiley face?

According to research from the staffing firm OfficeTeam, moderation is key. Nearly 4 in 10 (39%) senior managers interviewed said it’s unprofessional to include emojis or emoticons in work communications, but 61% stated it’s OK, at least in certain situations. When office workers were asked how they feel about these symbols, 59% said they never or only sparingly use them, while 41% send them at least sometimes.

“Emojis and emoticons are showing up just about everywhere, but that doesn’t mean they’re always appropriate for the workplace,” said Brandi Britton, a district president for OfficeTeam. “While using these symbols can help employees convey their feelings and personalities in written communications, they can also be distracting and appear unprofessional.”

What are your thoughts about using emojis or emoticons in work communications? Leave me a comment below.