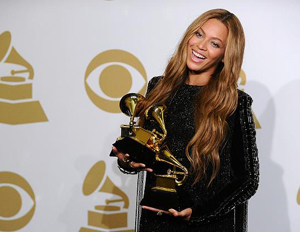 Los Angeles shined bright last night as stars from all over gathered in the city for the 57th Grammy Awards. Rihanna, Kimye, BeyoncÃ©, little Blue Ivy and A-listers across all genresÂ filled the Staples Center to see who’d be taking home this year’s golden gramophones.

BeyoncÃ© was nominated for six Grammy’s, including Album of the Year, Best R&B Song and Best R&B Performance. The audience was shocked when the “Flawless” performer lost Album of the Year to Beck’s Morning Phase. Kanye, in good Kanye fashion, jokingly ambushed the stage after Beck’s win, pretending to reenact his infamous 2009 episode when he halted Taylor Swift’s acceptance speech to say, “BeyoncÃ© had one of the best videos of all time!” The hip-hop artist and designer let Beck have his moment, though, but he did rant his true feeling afterwards on E!’s after show.

While the BeyHive and Kanye felt as though Queen Bey was robbed, she still managed to walk away with three wins, making her the second most-awarded female artist in Grammy history. Her 20th award pushes her past Queen of Soul Aretha Franklin (18 wins)Â and seven awards shy from Alison Krauss. She also made history last night as the most-nominated woman artist in Grammy history with a total of 47 nominations. Prior to last night, the honor belonged to country superstar Dolly Parton with 46 nominations.

In her acceptance speech for Best R&B Performance for “Drunk in Love” featuring husband Jay-Z, the record-holding artist said, “Wow, thank you guys so much. This is such an honor. I’d like to thank God. This has been such an incredible year. I love y’all. I’d like to thank my beloved husband. I love you deep. My daughter who’s watching, Blue, I love you.”