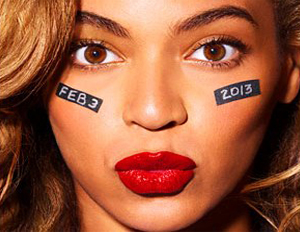 Apparently Super Bowl spectators had enough time to pause their rendition of “Single Ladies (Put a Ring On It),”pick up their beloved smart devices (for some, their mouths from off the floor) to weigh in on BeyoncÃ©’s 13-minute halftime show performance last night. If you were on Twitter, Facebook, or Instagram, you witnessed firsthand the barrage of posts-per-minute taking over your timeline. Mashable took a closer look at viewers’ interactions, releasing a by-the-numbers breakdown of the 31-year-old performer’s show in real time:

The “Love on Topâ€ singer’s show generated 5.5 million tweets, which brought the total for the game and halftime to 24.1 million. Here were the most popular topics: