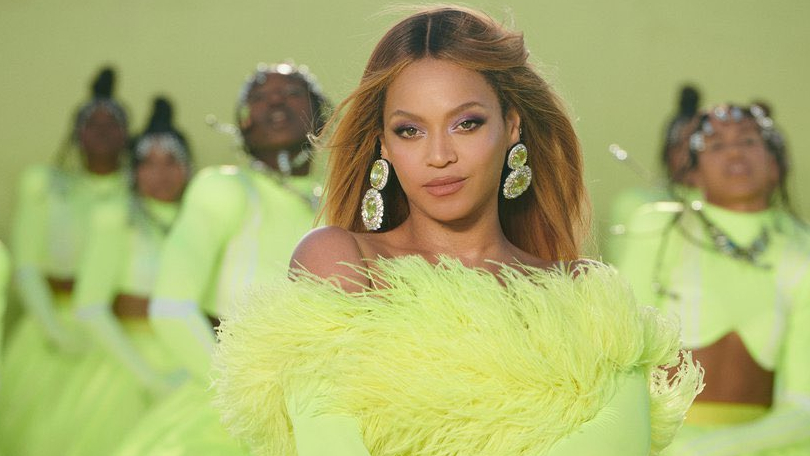 In recent memory, there has never been a time when Beyoncé performs that is topped by anyone or anything! With the Will Smith/Chris Rock “altercation” taking place, it seems as if people have not been speaking about Beyoncé, except on social media, of course!

Mrs. Carter had a fulfilling performance decked out in all green as her daughter Blue Ivy joined her, exciting the audience who viewed the show. The performance didn’t exactly take place AT the Oscars but on a Compton, California, tennis court, where Venus and Serena Williams grew up honing their tennis skills with their father. The songstress performed her single featured on the King Richard soundtrack, Be Alive complete with dancers and a band dressed in bright green, matching the diva. And the dancers donned hair beads and cornrow hairstyles, giving a nod to the early years of Venus and Serena when they wore the iconic Black beaded hairstyles while playing tennis.

As the video starts, two young ladies, dressed as Venus and Serena with beads in their hair, marched down the street as another young lady rode on a horse. The children were heading toward the tennis court where Queen Beyoncé held her stunning performance blanketed in tennis green.

Will Smith’s antic may have taken away the attention, but Beyoncé, as usual, stole the show with her performance. Twitter took notice.

me standing outside the tennis courts while Beyoncé performs #Oscars pic.twitter.com/p2ZYTFDv6P

Beyoncé did not have to eat us up like this pic.twitter.com/D2odiIUe64

THE ARRANGEMENT THE PRODUCTION VALUE BEYONCÉ YOU ARE SO LOVED #oscars pic.twitter.com/dDqhAuQUC3

we don’t call beyonce mother for no reason pic.twitter.com/kg4mWYYIZC

Blue Ivy is so generous to let Beyoncé share the stage with her #Oscars pic.twitter.com/n3omd2CMhV

Beyoncé is a top tier performer she never fails to amaze me #Oscars pic.twitter.com/Wqd1b6ErXI