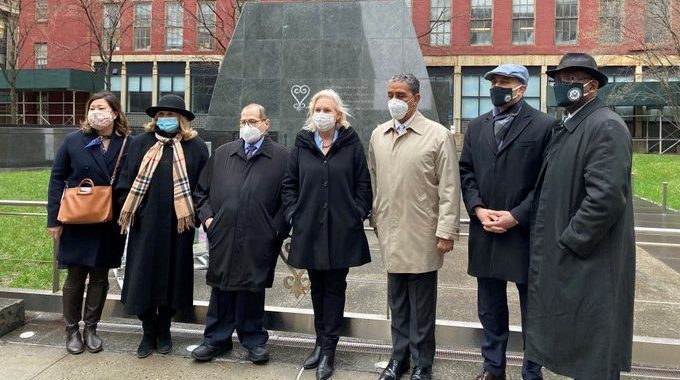 Lawmakers from the United States Senate and House of Representatives reintroduced a bill to expand the African Burial Ground National Monument in Lower Manhattan. Photo Twitter

The African Burial Ground, which was designated as a National Historic Landmark in 1993, has been previously identified as the oldest and largest known excavated burial ground in North America, for both free and enslaved Africans. It protects the historic role slavery played in building New York. According to the U.S. National Park Service, the historic site in Lower Manhattan is the final resting place for over 15,000 free and enslaved Africans from the 1690s to the 1790s.

CBS New York reported that a new effort to expand the African Burial Ground National Monument in New York is underway. A delegation of New York lawmakers reintroduced legislation to create the African Burial Ground International Memorial Museum and Education Center. The museum would reportedly serve as a “sister” site to the National Museum of African American History and Culture in Washington, D.C.

“The museum would create a new venue where we can grow our understanding of the true history of our nation, our state, and at the institution of slavery in the United States and around the world,” Gillibrand said, according to amNewYork. “At this moment in time, where we are having a reckoning, as a country, on the justices and inequalities the African American black communities have been subjected to from the earliest days of our nation today. This museum and educational center could not be more important.”

AmNewYork added that Nadler, who also serves as chairman of the House Judiciary Committee, remarked that we cannot successfully fight for equality without a clear understanding of the history of slavery in this country.

“Tens of thousands of African men and women—both enslaved and free—built New York City. The adversity they faced, the tangible contributions they made, and the lasting impact they left on our city are all part of a story that deserves to be told and honored by New Yorkers,” said Rep. Jerrold Nadler (NY-10). “I’m proud to join Senator Gillibrand in reintroducing the African Burial Ground International Memorial Museum and Education Center Act, which would establish a world-class museum as well as an educational and research center on the site of the African Burial Ground in lower Manhattan, where the remains of over 15,000 Africans are interred. For far too long, their lives have failed to receive the public remembrance or the historic recognition that they merit. With this bill, we hope to rectify that wrong by creating a permanent tribute not only to those resting at the burial ground, but also to the millions of enslaved Africans and their descendants who will be honored at the site.”