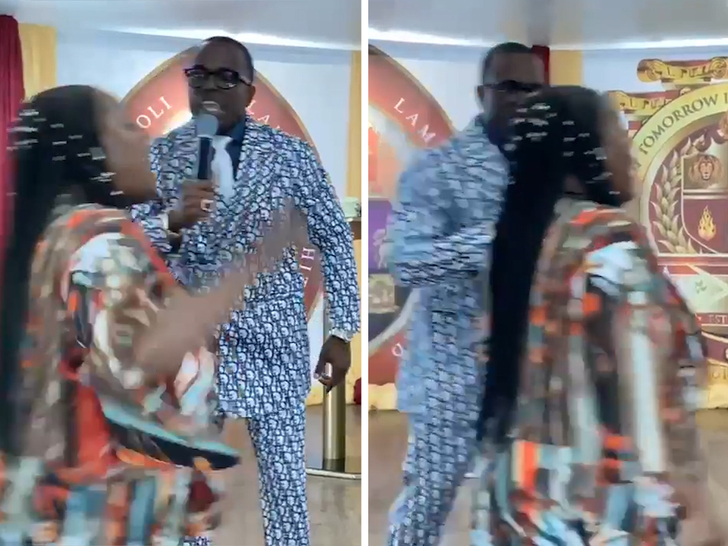 Brooklyn Bishop Lamor Whitehead was reportedly arrested and released two hours after he grabbed a woman by her neck during his live-streamed sermon on Sunday.

According to the NY Daily News, Whitehead was nearing the end of his service at Leaders of Tomorrow International Ministry in Canarsie when two women allegedly walked in and sat at the back of the church.

The agitated bishop, who was robbed at gunpoint during a live stream of his service over the summer, said the pair of women walked in “the same way it happened when my church got robbed.”

In a YouTube video of the incident, Whitehead appeared to get interrupted by loud and disruptive voices. He made an announcement to allow the women to record, but the voices continued to elevate.

“You want to come preach? Come on up here,” Whitehead said to one of the women, who appeared to be off-camera, during the social media livestream of the sermon.

Whitehead walked off-camera after initiating a pause in the service. Upon his return, he began to speak in tongues while the woman continued to hurl words at him. He walked into the crowd again, demanding to “move her out of here.”

After he approached the altar, the bishop’s sarcastic invites eventually led the woman to the front of the church, where she was caught on camera yelling at Whitehead. The woman also started yelling toward one side of the congregation, which the bishop said he felt threatened by.

“She came back storming toward my wife and my 10-month-old baby,” he explained.

“She went toward my wife and that’s when I grabbed her. I grabbed her and took her out of my church. All I could remember was the guys with the guns who put their gun in my baby’s face.”

“They came to my church to disrupt my service.”

Following the sermon, Whitehead and the woman were taken into custody. The bishop was arrested after being told he would be charged with assault. He believes “higher ups” in the department were responsible for his early release and all charges being dropped.

“They publicly embarrassed me and then they drop[ped] all the charges after two hours and apologized to me.”